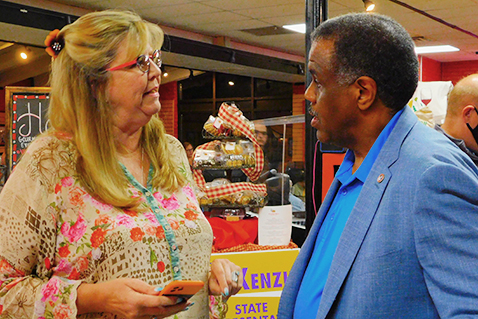 Turnout for Tuesday’s state and federal election in Knox County was huge, with 128,234 voters voting in person or absentee. The increased turnout encouraged local Democrats in a heavily Republican county. Democrats assembled at Holly’s Gourmet Market on Kingston Pike that evening to watch the election results come in and came away happy with the increasing party voting.

State Representative Sam McKenzie was easily re-elected in District 15 over Republican Pete Drew with almost 71% of the vote. The East Knoxville legislator and other candidates waited for the Knox County Election Commission to report results late because people were still lined up to vote after the 8 p.m. poll closings.

Her battle to retain a seat in the state legislature was strongly opposed by the local Republican Party with questionable mailers and television ads. About half of the new district, which stretches from east Knoxville to west Knoxville, takes in the former District 13.

Johnson got 58%of the vote compared to Republican newcomer David “Pozy” Poczobut. Pozy told The Focus Tuesday morning that he had nothing to do with the questionable advertising against Johnson.

Republican incumbent winners included Governor Bill Lee with 60% of the vote, Congressman Tim Burchett with 61%, and state Senators Randy McNally with 100% in District 5 and Richard Biggs with 62% in District 7.

Also re-elected were Reps. Jason Zachary with 64%, unopposed Michele Carringer with 100%, Dave Wright with 75%, and Justin Lafferty with 66%.

All of the state constitutional amends passed in Knox County.

As a footnote, the two Knox County residents on the local ballot as Independents for governor were Constance Every, who received .71% of the vote and Charles Van Morgan who received only .08%.