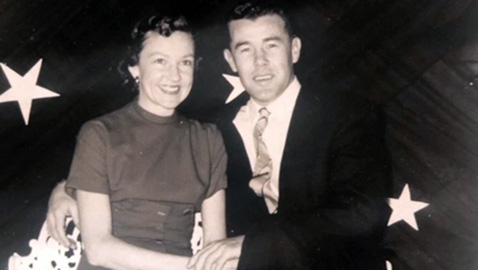 Gus Manning, the legendary UT athletic administrator, was once the quarterback at Rule High and an older teammate of DM Miller on the Golden Bears’ football team.

Miller passed away at 94 on April 15, but made his mark on Rule High and was well known in education and athletics locally and across the state.

Jon Miller, DM’s oldest son, shared a funny story last week that involved his dad and Gus, who is 96 and living at a West Knoxville nursing facility.

“In his first high school football game at Rule, they put Dad in and Gus was the quarterback,” said Jon. “Dad was an end and they called a pass play.

“Dad was supposed to run a little out route or whatever and Gus said, ‘Alright Miller, are you going to run an out route? Well, you better catch the ball, you little son of a b—-.’

“Dad caught the pass and said he got about 15 to 17 yards on it and they scored on that drive and ended up winning the game.”

Jon said DM told him that story “and I think even Gus told me that story years and years ago. Since they both told it, I guess it was true.”

While Manning went on to obtain his fame as an administrator in UT athletics, Miller played on an undefeated Maryville College football team that played in the first Tangerine Bowl, a forerunner of today’s Citrus Bowl.

Miller later became an assistant football coach and then the head coach at his alma mater.

“Dad graduated from Rule in 1944 and a day or two later he was in the service (Navy),” said Jon. “He stayed there two years and then went to Maryville College.”

During his prestigious career, DM was the only person to serve on both the city and county school boards. He also was on the TSSAA Board of Control and inducted into the TSSAA Hall of Fame in 1994.

Through the years, Jon accumulated a lot of admiration for his father and he shared those feelings.

“I admired my father’s intelligence, athleticism, vision and caring/protectionism,” he pointed out. “I think he was the first person in his family to earn a college degree. He played college football, finished second in the 100 yard dash and high jump in the City-County Championship while at Rule.

“He served his country in the U.S. Navy on the USS Gosper, and couldn’t swim a lick. He and mom took care of my sister, Libby, for 64 years, until she moved into a group home. He slept with her on his chest for two years, because she wasn’t projected to live very long, with all of her disabilities and problems.