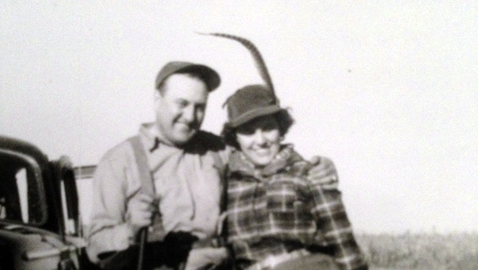 Their names are familiar.  I saw Doctor and Macel mentioned in the late Woodrow Luttrell’s memories of the “Back When” series recently published in the Focus.  Macel was Woodrow’s sister.  I cannot recall a time when I did not know the names “Doctor and Macel.”  But, the story of their wedding and honeymoon is new to me.  Their youngest of four children and my childhood friend, Rada, shared the couple’s fascinating story as it was told to her by her mother, Macel.

“Dad and mother had been going out for awhile after she started working as a nursing assistant for him,” Rada said.  “One day while at work, he asked her to go on a pheasant-hunting trip to South Dakota with him and join some friends there,” she added.

Her mother was stunned, and her answer was direct.  “You know mom and dad would not go for that!  We would have to be married!”  It was then that the doctor asked her to marry him.  He was meaning to the whole time.

“I think he liked to joke with her,” Rada said.

Macel said yes to the marriage proposal.  They went to Pastor Brown’s house in Maryville, Tennessee, for the wedding.  The date was October 10, 1946.  Rev. Brown had been the pastor at Washington Presbyterian Church in Corryton.  Macel was fond of the blind pastor and his wife, Bonnie.  Mr. and Mrs. Carl Luttrell, Macel’s parents, and her sister, Betty, attended.  After the early morning marriage ceremony, Pastor Brown and Bonnie had a fine breakfast waiting for them.  Then, the newlyweds were off to South Dakota!

In Kentucky, they finally stopped at a local cafe for a honeymoon steak late lunch.  Macel was starving.  As soon as the steak was brought out, the plate ended up on her lap and wedding suit!  She was embarrassed, upset, and still hungry.  On their first night of travel, they   had a flat in the pouring rain and spent the night at a nearby home of a kind, older couple.  In spite of the misfortunes, the new bride had a wonderful time on the trip.  She saw the Corn Palace, the Black Hills, and Mount Rushmore.  She even shot a pheasant and had a hat made from the feathers.  Doctor and Macel touched hundreds of lives, and Focus readers will have an opportunity to read about their inspiring life in upcoming stories.