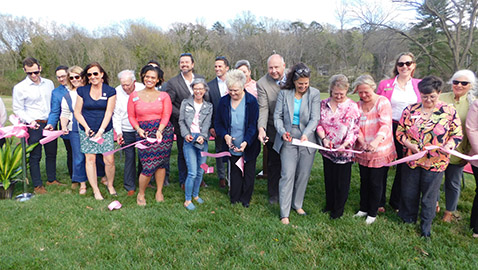 Spring is here and the Dogwood Arts Festival has returned to Knoxville. The festival, an annual event in East Tennessee for nearly seven decades, officially kicked off Thursday afternoon at a ribbon-cutting ceremony.

The church is near one of this year’s feature trails, Lakemoor Hills.

Dogwood Arts normally has one featured trail annually. In 2022, however, the organization will have three featured trails, all on the south end of town. The trails at Island Home and Chapman Highway will also be featured.

Dogwood Arts began as a small improvement project 67 years ago and since 1955, there are now 85 miles of trails in the Knoxville Area.

Knoxville Mayor Indya Kincannon said she is honored that the city has the festival.

“My kids went to camp in the summers at this church,” she said. “I’m honored to be here, and this year, I’m happy that we’re having three featured trails.

“We have 13 trails and every year, we had one featured trail. “This year, we’ll feature all the trails in one part of town. It used to be that a trail was a featured trail every 13 years and that would take a long time.”

The 2022 festivities will include a pair of new happenings as Dogwood Arts opened a new trail for the first time in 20 years. The new trail is located in the West Hills Community.

This year’s Dogwood Arts Festival will conclude on May 14 with the inaugural Southern Skies Music Festival at World’s Fair Park, an event three years in the making.

“I’m excited this year because we’ve opened a new trail for the first time in 20 years,” said Eric Botts, president of the Board of Directors for Dogwood Arts. “We’ll also have the first Southern Skies Music Festival, an event that we wanted to start it three years ago.”

Executive Director Sherry Jenkins said that she’s pleased that the festival has had a return to normalcy after the COVID-19 pandemic.

“It’s great to be back,” she said. “I’m excited. “This really brings Knoxville together.

“The trails really helped us get through the pandemic because you had people who always wanted to drive and see all the trails. (During the pandemic), they were able to do it.

“We’re looking forward to bringing the festival into the post-COVID era.”