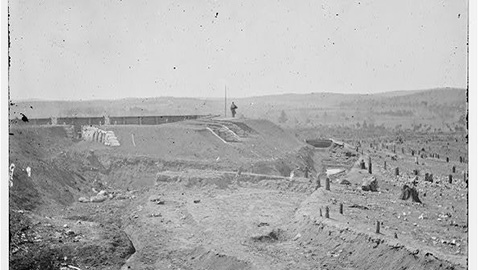 The neighborhood of Fort Sanders has been in the news lately. The historic section of Knoxville is threatened by progress, hospital growth, and loss of historic homes. Fort Sanders property owners are rightfully proud. A Civil War earthen fort there gave the area its name and lots of other things in the area are named for Fort Sanders.

The fort was named for Col. William S. Sanders, who was shot atop the walls by a Confederate sharpshooter and died a day later in the Lamar House, which now houses the Bijou Theater. It is also thought that Sanders had a romantic relationship with a local Knoxville woman whose family included a Confederate spy.

But there’s much more to William Sanders that isn’t widely known.

Sanders was a Kentucky native and a graduate of West Point. He was a questionable student and ironically was dismissed by Superintendent Robert E. Lee. He was saved from dismissal at West Point by a plea from then U. S. Secretary of War Jefferson Davis, a cousin of his.

He served as a Second Lieutenant in the western territories and remained loyal to the Union. He took part in several campaigns and after the Battle at Antietam was chosen by General Ambrose Burnside to command the Army of the Ohio. He became a colonel in the 5th Kentucky Cavalry.

Prior to the Knoxville campaign, Sanders already was a Union Army hero. His exploits are legendary among Civil War buffs. Before the Union invasion of Tennessee Sanders led a cavalry raid though East Tennessee and even threatened Rebels in Knoxville. His force disrupted Confederate operations by crossing from Williamsburg, Ky. through the mountains to Wartburg, capturing a large supply base there. The force then moved to Lenoir City where he burned the depot, captured cannons and ammunition, and destroyed the railroad there.

Sanders’ force then threatened Knoxville along the Kingston Road but was forced to withdraw because of cannon fire from the enemy on Summit Hill. His Union force then continued to McMillan Station and burned a railroad bridge there. His next mission was to attack the Confederate fortification at Strawberry Plains where he captured the enemy, and took the bridge, town and a large amount of supplies.

Sanders’ Union force then moved to New Market where they were warmly greeted by the population there and then to Jefferson City where they destroyed the bridge, captured more supplies and burned a saltpeter and gun factory.

The invading Union force then looked for a way to skirt Confederate forces on Cumberland Mountain and eventually took a little known path, abandoning and destroying much of the captured supplies, eventually arriving in Boston, Ky. (near Jellico) with only two men killed, four wounded and 13 missing.

Col. Sanders had proven that a Union force could cross into Tennessee and General Burnside used the success in planning the huge movement that resulted in the capture of Knoxville and East Tennessee in 1863, keeping the area in Union hands for the remainder of the war.

Sanders accompanied the Burnside invasion and was promoted to brigadier general but before his promotion could be confirmed he was shot atop the earthen walls of then Fort Loudon, now Fort Sanders.

The colonel was at first buried in the Second Presbyterian Cemetery and later his remains were exhumed and reburied in the Chattanooga National Cemetery.