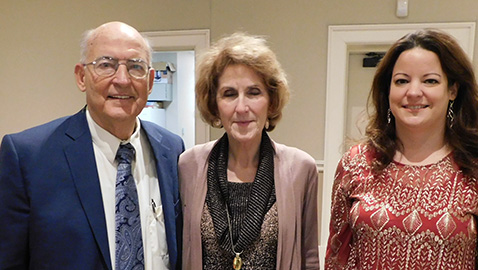 Sam Houston was asked once what had been the most meaningful event in his life. The elderly man, former president of the Republic of Texas, former governor of the state of Texas, and a patriot leader in the war with Mexico, said that it was teaching school children in Blount County, Tennessee.

Houston was not a Tennessee native but moved here as a young boy with his family to a then very rural part of our neighboring county Where he basically grew up among Cherokee leaders.  Joy Montgomery and her father, Dr. Robin Montgomery, presented a lecture at the East Tennessee History Museum recently and Joy said that being raised in East Tennessee “molded him” into the leader he was to become.

Most Tennesseans and Texans know a bit about Houston, who eventually served as governor for both states, but there’s a lot most don’t know about the man. The Montgomery pair covered much of it in their new book “Sam Houston’s Quest.”

Joy Montgomery explained that they knew about Sam Houston in Texas but little about his days in Tennessee. She said she and her father both attended Sam Houston University and make annual visits to his grave in Huntsville, Texas, but a trip to the Houston statue dedication in Maryville turned into a venture to explore various places in our region, like Hiwassee Island. She said they had so much fun in their Tennessee outings that they took East Tennessee historians and officials to Texas to learn about Houston’s life there.

She said that following his term as a school master Houston worked in a store near Fort Southwest Point, now Kingston. He became acquainted with the Cherokee Rogers brothers and Chief John Jolley, who had a village on Hiwassee Island south of the current Decatur, Tn. Houston lived with the tribe and learned the language. His association with the Cherokee tribe, which eventually adopted him, lasted his whole life and he tried to locate land for them to occupy in Texas and Mexico.

While still in Tennessee, he became acquainted with Rev. Gideon Blackburn and Isaac Anderson, founder of Maryville College. He volunteered and became a soldier in the War of 1812 and then became a sub-agent under Col. Jonathan Return Meigs.

Several of Houston’s Cherokee tribe members were removed early and moved out west. Those “Old Settlers” were helped by Houston who made sure they had blankets, guns and other supplies.

Elected to Congress from Tennessee, Houston went to Washington, D.C., and appeared there in Cherokee tribal clothing. That wasn’t received very well and, according to Joy Montgomery, Congress cut the funds to Indian sub-agents in half as a result.

Houston passed the bar exam and opened a law office in Lebanon, Tn. He became a commander of the Tennessee Militia and served in the Tennessee House before being elected state governor.

Houston’s personal life was not as successful as his public life. He married Eliza Allen, much younger than him, but that marriage ended after 11 months. It was rumored that the young wife was discussed during his delirium while being treated for wounds received in the War of 1812, where he was shot by an arrow in the thigh and wounded twice by gunfire. The divorced couple, according to Joy Montgomery, never spoke ill of each other.  His relationship with his Cherokee wife apparently was off and on until he left for Texas. There, in the later years of his life, he married Margret Moffette Lea and the couple had eight children.

Sites in our area connected to Houston include the Houston Schoolhouse in Blount County, a historic marker where Sam’s parents settled, the statue in Maryville at the Municipal Building, Southwest Point, Hiwassee Island, Hiwassee Garrison Cemetery and Agency Creek in Meigs County.

The Sam Houston Schoolhouse State Historic Site is a single-room log cabin-style school built in 1794.  It is open to the public and the state historic site is operated under an agreement with the Tennessee Historic Commission. It was listed on the National Register of Historic Places in 1972. You can get more information about the restored school house by calling (865) 983-1550 or you may find the historic site online at www.samhoustonhistoricschoolhouse.org.