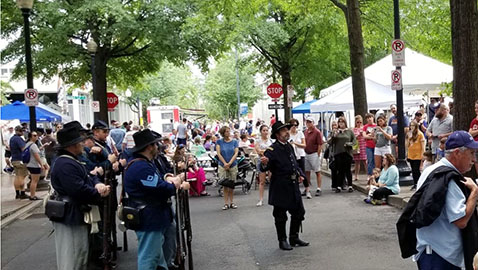 History comes alive Saturday in and around downtown Knoxville during the East Tennessee History Fair. The free event draws hundreds, if not thousands, of people to the one-of-a-kind gathering of historians, reenactors, authors, vendors, organizations, and musicians.

You might even meet and speak with the likes of Abraham and Mary Todd Lincoln, Union General U. S. Grant, and maybe even Davy Crockett. There’s free parking in the city garages and free trolley service to various events. While much of the activity takes place downtown and around the East Tennessee History Museum there’s also a Historic Homes Bus Tour to Blount Mansion, James White Fort, the Mabry-Hazen House, Bethel Cemetery and Museum, the Women’s Basketball Hall of Fame and the Beck Cultural Exchange Center.

If you’re a retro television fan of local programs the Tennessee Theater opens at 10:30 with a tour and showings of “Startime with Jim Clayton,” “The Cas Walker Farm and Home Hour,” and a preview of “Country Music, a Film by Ken Burns.”

Reenactors in and around the fair include Native Americans,  pioneers, long hunters, political figures, Civil War soldiers and Vietnam veterans. There are also hand-on demonstrations of crafts and entertainment on the Main Stage with traditional music.

Downtown venues include the History Center, Krutch Park, Tennessee Theater and Market Square where you will find an antique fair, art market, farmers market, food, parking and crafting. Admission to the museum that day is free and featured currently there is “Voices of the Land, the People of East Tennessee” and “It’ll Tickle Your Innards, a History of Mountain Dew.”

Out at Lakeshore Park, a vintage base ball game will be played and there will be an open house at the old East Tennessee Hospital for the Insane.

The fair is also awarding the Best Historic Costume and the Most East Tennessee Spirit. That event is at 10:15 followed by music at 11 a.m. through 4 p.m. all on the Main Stage. The event also features a “History Hound” costumed canine competition at Krutch Park at 9:30 a.m.

Events begin at about 10 a.m. and run until 5 p.m. There’s also lots to do for children, including a Davy Crockett Birthday celebration with activities, storytelling and a birthday cake.