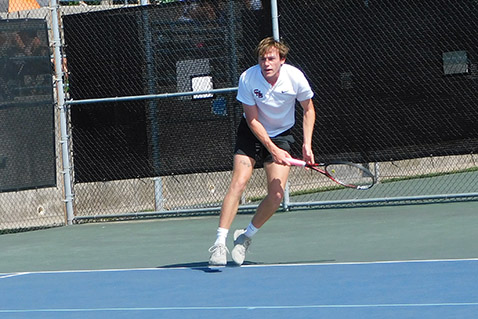 Luke Prince was a two-sport athlete at Central throughout his high school career with the main emphasis on tennis until this spring when he “prioritized 100 percent” to baseball.

Before he graduated, Luke wanted to enjoy the team aspect a little more than the game of baseball provided and that he did, with “icing on the cake” too, as last Thursday he found out he had received honorable mention on the All-District 3-4A team.

That same day Prince, who played the No. 1 singles position for Central’s tennis team throughout high school, won his semifinal match in the Class AA Region 2 tournament at Tyson Park, defeating Preston Young of Bearden 6-0, 6-1. That put him one victory away from a TSSAA state tournament berth.

Luke had won his first District 3 singles title a week earlier after going through the regular season undefeated.

“Most of the scores in his matches were either 8-0 or 8-1,” said Central tennis coach Joe Walsh. “He is an exceptional player, the likes Central High has not seen in 30 years when Matt Turner played here. (Matt went on to play at Alabama.)

“Luke’s ability to play two spring sports and excel at both reflects on both his skills and his desire to win.”

On one play during his match against Young, Prince retreated to make a nice backhand recovery shot and placed the ball where his opponent couldn’t get to it.

“He covers the court so, so well,” said Coach Walsh. “And he continues to play until the final shot.”

Not many high school student-athletes play two sports at the same time of the year, Walsh added. “He hardly gets that much tennis practice during the regular season and just squeezes in the matches. When tournament time gets here, he practices more.”

Prince played baseball this spring for first-year head coach Brandon Roberts. He complimented both of his coaches for working together to help make it possible and avoid a lot of scheduling conflicts.

“Coach Walsh waited to make out his tennis schedule until after seeing the baseball schedule,” Prince pointed out.

“It worked out great. There were only a few baseball games I had to miss for tennis.”

Prince also said he “gets burned out” if he does too much of one thing and he felt like his sports combo went a lot better for him this season.

“I’ve had a really good mix this year and being able to do what I want to do with a lot of freedom, it’s worked out great and I’ve had a lot of fun.”

Luke was an outfielder for the Bobcats this spring, starting most of the time in right field. He was the designated hitter in what turned out to be the final game of the season, a 6-3 loss to West on May 8 in the district tourney at Powell.

With his baseball season over, Luke headed into the region tennis tourney confident and expecting to win.

After breezing to the semifinal win, he would have to get past an old foe and friend in West’s Andy Lee, who had eliminated him in a three-set region match in 2021.

Play between the two seniors at Tyson Park last Friday was halted by a late afternoon rain shower with the score tied 2-2 in the opening set. The tourney was eventually resumed indoors at the Knoxville Racquet Club and Prince lost the first set 7-5.

A spring sports season that Prince had said earlier was his “favorite of all” ended a little sooner than he wanted.

Luke, who has a 4.2 grade point average and is in the Top 10 percent academic-wise at CHS, said he will attend the University of Tennessee and major in business, with a particular interest in marketing and stocks. He also plans to continue playing tennis on a “club sport team” at UT.

You gotta think he’ll probably take in some baseball games, too.