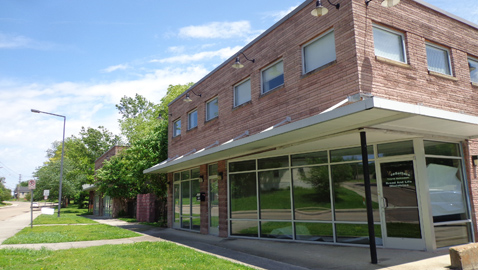 Cherokee Health System bought the buildings in 2012 and has a community care facility at the former office of Dr. Walter Hardy, the first African-American physician in Knoxville.

The Hardy Clinic and the vacant building next door, at 2202 and 2200 Martin Luther King, Jr. Avenue, will be joined and the added space could double the number of local patients being treated there. The expansion, funded in part by a $1 million grant from the U. S. Department of Health and Human Services, will not only expand the building but add additional staff there, especially for mental health care.

“Nationally 26% of the people have mental health issues, or one-quarter of the population,” Dr. Winford told the audience at the Burlington Public Library’s meeting room. She said that 59% of those people don’t get care.

“Locally the percentage is higher,” she said.

Dr. Winford said that Cherokee is a “Federally Qualified Health Care System” and receives about 30% of its funding from the national government.

“If you don’t have the ability (to pay) we are your safety net,” she said.

“Cherokee is the largest mental health provider in East Tennessee,” Dr.  Winford said, adding, “Expansion is one of the solutions.”

“I see 50 patients a week,” she said, explaining that the current clinic in the former Dr. Walter Hardy building has three primary care providers with seven support staff;  together they saw 1,723 patients last year. The entire Cherokee Health System saw 65,000 patients at their various locations in East Tennessee.

Dr. Hardy served East Knoxville with a notable practice and Dr. Winford said the arch that now stands beside the buildings may be moved inside and displayed in a new waiting room.

“There will be room for at least one more primary care provider and three health care professionals,” she said. She said the focus may be on drug recovery. The new facility, as planned, will also feature a patient engagement center where people can meet with nurses and behavior providers, get prescriptions refilled, and be screened for how soon they need to see a doctor.

“But expanding the clinic doesn’t solve the problem,” she said, urging the audience to write, call or visit state legislators, attend public meetings, tell their story and get politically active.

Asked about rumors of less federal funding Dr. Winford said the funds there are similar to last year’s funding and the clinic is alright financially until October. She said they are actively recruiting medical professionals.