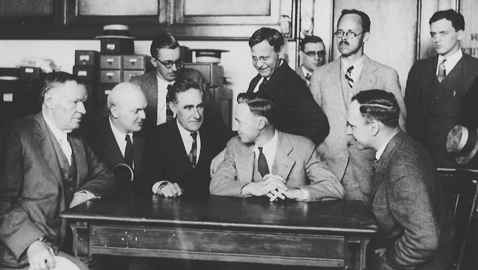 Dr. John R. Neal was an American original; an educator, lawyer, state legislator, and perennial candidate for public office.  Neal could have been the blueprint for the absentminded professor.  Dr. Neal is frequently remembered for his many eccentricities, which included paying virtually no attention to his personal appearance, bathing infrequently, if at all, and once attending a dinner and placing his salad in his jacket pocket.

Neal came from Tennessee’s aristocracy; his father for whom he was named, John Randolph Neal, had fought for the Confederacy, rising to the rank of Lieutenant Colonel.  The elder Neal was elected to the Tennessee House of Representatives and the State Senate.  In 1884, Colonel Neal was elected to Congress from Tennessee’s Third district.  Congressman Neal was reelected in 1886 and might have remained in office indefinitely had his health not failed.  Seriously ailing, Neal announced he would not be a candidate for reelection in 1888.  Congressman Neal came home to Tennessee and died within a month of having given up his seat in the House of Representatives.  Neal’s son would follow in his father’s footsteps and manage to replicate some of the father’s success. The younger Neal would never reach the same political heights, but it was not for lack of trying.  John R. Neal was highly intelligent; in fact, he was considered to be a brilliant man by many.  Certainly he was well educated, entering the University of Tennessee when he was fourteen years old.  The teenager graduated from the University of Tennessee with high honors and moved on to attend Vanderbilt University where he earned his M. A. and law degrees.  John R. Neal then went to Columbia University where he received a doctorate degree in philosophy.

Immediately following his graduation from Columbia, Neal was hired as a law professor at the University of Denver where he taught for eighteen years.  Neal still spent most of his time in Tennessee and was elected to the House of Representatives in 1906.  Neal was a highly productive member of the House and sponsored legislation, which provided the University of Tennessee with an appropriation of $50,000 annually.  It might not sound like much of an achievement until one considers it was the first time in Tennessee’s history that the University of Tennessee had received a recurring appropriation from the state government.  Neal introduced a flurry of other bills he believed would improve the lives of Tennesseans.  John R. Neal sponsored the bill reforming school districts in Tennessee.  Neal’s bill provided for local boards of education elected by the people rather than the district boards that had existed previously.  Neal’s performance in the legislature was impressive enough that he won a promotion to the state senate in 1908.  Neal proved to be far less adept at navigating the political currents once he went to the state senate.  In Neal’s defense, Tennessee politics had been roiled by the controversy surrounding the murder of former U. S. senator Edward Ward Carmack.  Carmack had been the vocal champion of prohibitionists in Tennessee.  Running on a ‘dry” platform, Carmack had run an exceedingly bitter battle against incumbent governor Malcolm R. Patterson, who was the polar opposite of the former senator.  Patterson was perceived to be the white knight of those opposed to prohibition.  The governor had only narrowly turned back Carmack’s determined challenge inside the Democratic primary.  Following his defeat, Carmack returned to his profession as a newspaper editor, hired by Luke Lea as the editor for the Nashville Tennessean.  Carmack proceeded to bathe his political opponents in vitriol and was so good at it he felt he had to move about the city armed.  E. W. Carmack was armed when he met Colonel Duncan B. Cooper and Cooper’s son Robin on a Nashville street.  The men drew their pistols and exchanged shots and Carmack was left dead in the gutter.  Many were outraged by Carmack’s death, but none more so than Volunteer State prohibitionists.  Prohibitionist sentiment in Tennessee surged after Carmack’s death and John R. Neal voted for statewide prohibition.  The bill passed the General Assembly and Governor Malcolm Patterson promptly vetoed it.  The legislature just as quickly overrode the governor’s veto.  John R. Neal had been an active opponent of Governor Patterson as a member of the state senate and proceeded to horrify his friends by switching sides.  Neal vociferously opposed a combine of anti-Patterson Democrats and Republicans who were attempting to institute statewide primary elections and remove the State Board of Elections from the control of the governor.  Unsuccessful at stopping the coalition effort, Neal refused to vote on the reform package.  Once again, Malcolm Patterson used his veto pen and John R. Neal joined twelve other senators in leaving the state to avoid a quorum in the Senate, as well as voting on the question of overriding the governor’s veto.  The “missing thirteen” became a hot topic in Tennessee’s newspapers and left the legislature unable to convene a quorum for a week.  Finally, the Speaker of the House called a joint meeting of the House and Senate and declared it constituted a proper quorum.  Neal and his colleagues had sequestered themselves in Kentucky and finally returned to Nashville.  Despite his odd behavior in switching sides, John R. Neal did have one solid accomplishment during the legislative session.  Neal introduced a revolutionary funding bill for education that had been written by Dr. Philander P. Claxton.  Claxton was a prominent educator and a professor at the University of Tennessee and the bill he authored for Neal required thirty percent of Tennessee’s tax revenue stream go to support education in the Volunteer State.  The final bill gave the University of Tennessee seven percent of the total, finally providing a regular source of funding for the university.  Prior to that time, the University of Tennessee had subsisted on whatever the legislature chose to dole out that given year.  Neal also cosponsored legislation that reorganized the Board of Trustees for UT.  Neal’s bill provided for the appointment of two members to be appointed from Knoxville, where the university was located, as well as one member from each of Tennessee’s ten congressional districts.  The bill also provided for a number of officials to serve as ex-officio members of the Board of Trustees, including the governor and president of the university.

John R. Neal had won considerable respect from many of his peers and constituents for his productivity as a legislator and he nursed ambitions for higher office.  That ambition died the same day he did and Dr. Neal would be a candidate for governor, United States senator, or Congress every two years for almost the rest of his life.  Neal’s first foray into statewide politics came when he sought the Democratic nomination for governor in 1910.  After the deep divisions inside Tennessee’s Democratic Party, most Democrats were looking for a candidate who might bring a semblance of unity for the fall campaign.  When it finally became clear to John R. Neal that he was not that candidate, he withdrew his candidacy.  Democrats persuaded a highly reluctant Senator Robert L. Taylor to run.  Taylor was not merely being coy; he had been elected governor of Tennessee three times and had spent years trying to make it to the United States Senate.  Taylor was content to serve in the Senate and had no desire to be governor again.  Yet Taylor also recognized a combination of “Independent” Democrats and Republicans presented a legitimate threat to the regular Democrats.  The threat was very real and nobody was more surprised than Robert L. Taylor when he lost to Republican Ben W. Hooper that fall.  “Our Bob” Taylor had been one of the most popular political figures in Tennessee for decades.  It was a shocking defeat.

John R. Neal, disappointed his not being his party’s nominee for governor, sought reelection to his seat in the state senate.  Like Bob Taylor, John R. Neal received a very unpleasant surprise.  Throughout his career, Neal would loudly complain opponents had used either unethical or illegal means of beating him.  Neal was outraged by his loss in 1910 and in this particular instance, he was likely right that he had been cheated out of the nomination.  A series of “snap” conventions had been called in the counties comprising Neal’s state senate district and the candidate did not even known where or when all of them were.  Neal insisted there should be a party primary and evidently saw no irony in the fact he had tried to kill the notion of primary elections as a member of the Tennessee State Senate. Neal had been opposed by Governor Patterson in his bid to be renominated.

As the Democrats attempted to reclaim the governor’s office in 1912, John R. Neal officially entered the campaign with an announcement in Dayton, Tennessee.  Neal brought in Malcolm Patterson to speak on his behalf and considering Patterson’s pardoning of Colonel Cooper after the killing of Edward W. Carmack was still quite fresh in the minds of most Tennesseans, it is questionable whether the former governor did more harm than good to Neal’s candidacy.  Initially, Neal’s gubernatorial aspirations were fueled by strong support, primarily in East Tennessee.  John R. Neal confidently believed he had a very good chance of winning the Democratic nomination to face Governor Ben W. Hooper.  Whatever momentum the Neal campaign was garnering stalled when the candidate had to return to Denver to keep the terms of his teaching contract.  Neal taught at both the University of Denver and the University of Tennessee and while out of state tried hard to keep his campaign alive.  Once again, Tennessee Democrats were looking for a candidate who could unify the party and win the general election against the Republicans.  John R. Neal was hardly anybody’s idea of a candidate who could unite the still fractured state party and beat Ben Hooper in the fall.  The party turned to the “Old Warhorse” of Tennessee’s Democratic Party, former governor Benton McMillin.  Dr. Neal realized he had no chance of winning the nomination against the popular former governor and withdrew.  Yet Neal had not given up hope of serving in high office and another opportunity presented itself with the death of Senator Robert Love Taylor.  United States senators were still elected by state legislatures and Neal declared himself a candidate for the United States Senate.  It was a hard and bitter battle fought between a host of serious candidates and John R. Neal proved to be a credible candidate.  Neal peaked at fifty-five votes, with sixty-six needed to win.  Neal lost the Senate contest and was already beginning to wear the aura of defeat.  Never again would John R. Neal hold political office.

Still, Dr. Neal was recognized as a man of ability and was a very popular instructor and received some consideration to serve as president of the University of Tennessee when Brown Ayres died in 1919.  However well liked Neal may have been by his students, his eccentricities were beginning to annoy some University of Tennessee officials.  Neal was a source of dismay and anguish for the university’s bookkeepers.  Wealthy, John R. Neal was indifferent about money and might not cash his paychecks from the University of Tennessee for months, if he cashed them at all.  Neal was more apt to use a paycheck as a bookmark than cashing it.  Occasionally Dr. Neal might allow weeks and months’ worth of check accumulate in the office of the university’s treasurer.  John R. Neal irritated others at the university with his appearance, which could best be described as careless; at worst, it was downright slovenly.  Another issue was his unconventional way of teaching his students, although his students claimed his method of teaching was effective.

By 1923, John R. Neal had accumulated some enemies at the University of Tennessee and a fateful decision awaited the unsuspecting law professor.