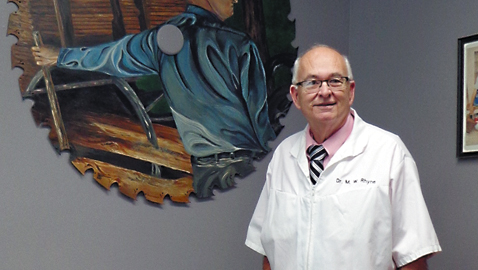 From 1978 until last June the optometrist was part of Rhyne and Patton on Callahan Drive. The Focus interviewed Dr. Rhyne on his 69th birthday recently and he said he began his career in 1971 with Dr. Jim Tumblin in Fountain City.

“He was my doctor and I was planning to become a pediatric doctor until I had back surgery,” he said. Tumblin encouraged him became an eye doctor and, after returning from college, he joined the practice.

“I’ve always been interested in kids and wanted an occupation where I didn’t have to lift kids,” he said.

Dr. Rhyne’s patients have followed him to his new location, which he opened in January. He specializes in working with children who have trouble using their eyes because of a head injury, brain problems or autism.

The East Tennessee Binocular Vision Center offers a full scope of optometric care and emphasizes the diagnoses and treatment of visual disorders associated with development delays, learning difficulties, and problems caused by trauma. The prescribed treatment involves specialty lenses and vision therapy. “We use lenses and how the brain takes information in from the eyes,” he said of his specialty of 42 years.

The doctor also works with adults and with the Patricia Neal Rehabilitation Center and said that probably the biggest part of his practice is treating vision problems of adults and stroke victims.

His son, Seth, a UT student, is working with him and is planning to also become an optometrist. His wife, Susan, is a registered nurse and the Rhynes live on the historic family farm in the Heiskell Community.

The new Rhyne office is unique as much of the furnishings are family heirlooms, historic pieces or handmade items by the doctor. The benches in the waiting room were salvaged from the old Southern Railway Depot, the eyeglass boards were crafted by Dr. Rhyne, and the paintings on sawmill blades were painted by Christy Davis. Davis had been a patient who the doctor helped restore her vision and she painted a portrait of Rhyne’s father on a blade that hangs on the wall there.

Doctors and organizations from all over the nation send patients to see Rhyne. He is currently treating a woman who had brain surgery performed by former presidential candidate Dr. Ben Carson.

Dr. Rhyne was honored in 2016 by the Consumer Research Council of America as one of America’s Top Optometrists.

More information about the new office can be obtained by calling 865-437-3166 or on Facebook.