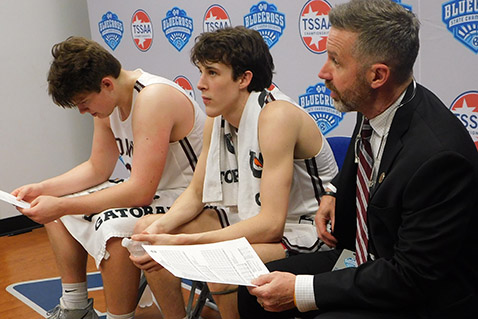 Bearden battled its way to the finals of the BlueCross Basketball State Championships and even overcame a 15-point deficit in the fourth quarter of the title game, but ran out of firepower in a four-minute overtime period.

Tradition-rich Kingsport Dobyns-Bennett took advantage of the Bulldogs’ plight and pulled away to win 69-60 in overtime Saturday night at Murfreesboro to end a 77-year-old title drought.

The Indians of upper East Tennessee had been a state runner-up four times since their 1945 championship.

The loss prevented Bearden from sweeping the girls’ and boys’ Class 4A state titles this year.

Bearden senior wing Hayden Moseley hit a do-or-die 3-point shot from the corner with one second left in regulation to send the game into OT.

But with the Bulldogs trailing by three points (59-56), Bearden senior guard Elijah Bredwood, a Mr. Basketball finalist, picked up his fifth foul on a charging call as he drove down the lane with 1:25 on the clock.

Bearden had already lost Darian Bailey, another one of its best players, to a fifth foul in the fourth period.

Bearden’s Nelson Karnowski answered with two free throws, but the Bulldogs would get no closer.

Moseley was whistled for his fourth foul with 46 seconds to go and his fifth with 36 seconds left, further reducing Bearden’s offensive chances, and Browder’s two free throws extended the difference to eight points (66-58).

A layup by Wyatt Shomaker accounted for the Bulldogs’ final points with 29.9 seconds remaining and Dobyns-Bennett ahead 66-60.

Moseley finished with 25 points to lead Bearden, which ended the season 31-7. Bredwood added 13.

Bearden beat Brandon Miller, the Class 4A Mr. Basketball, and Cane Ridge High 69-67 in the quarterfinal round Wednesday and toppled Lebanon in the semifinals Friday 62-44, despite being greatly outnumbered by the Blue Devil fans in attendance.

“I didn’t see a whole lot of (Bearden) folks there,” said Bearden Coach Jeremy Parrott after the game. “When you’ve got Lebanon just down the road, you imagine they’re going to outnumber us a little bit.