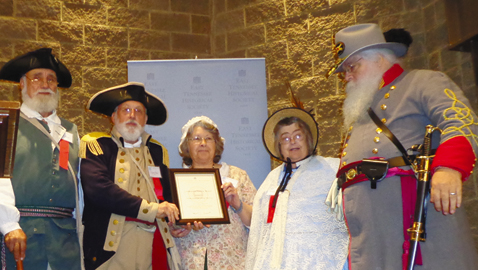 If you attend the State of Franklin Day at James White Fort this Saturday you may find characters there representing East Tennessee and Knoxville’s early days. The costumed actors are part of a group called Tennesseans For Living History and you’ll find them here and there around our region in different period clothing and playing different historical figures.

Lynn Fox is a member of the group, which he described to The Knoxville Focus as a bunch of friends with an interest in history who have been keeping the spirit of Tennessee and American heroes alive for more than 30 years.

A retired U.S. Army Major and Eagle Scout, Fox was born on the 4th of July and says the Living History group was formed two years ago and most of the members belong to two or more similar groups. There’re more than 40 members and includes women, men and children.

“We have a love of history and took part in about 140 events last year,” Fox said, noting that over the past two years they have been involved in more than 200 activities.

Recently the group was featured at the dedication of the new statue to Houston in Maryville, the Scottish Games, and honored by the East Tennessee Historical Society. They also appear at schools and libraries around our area in costume and speak as their character or about local history.

The group meets at the David Hall Cabin each month near the Bull Run Steam Plant. Fox says there’re no dues to join and explains that the members are “just a bunch of friends who enjoy what we do.”

Upcoming events after the Franklin Day at James White Fork include appearances at David Hall Days June 4-5, the Clinton Public Library on June 7, the Cumberland Gap Jamboree on June 9-11, and they’ll be back at White’s Fort on June 25. They will take part in the Gatlinburg 4th of July Parade and the Norris Dam Liberty Pole program, the Grainger County Tomato Festival in July and the East Tennessee History Fair at Krutch Park in August.

“We represent history to educate people of Tennessee and American History through interpretation, everything from the American Revolution through World War II,” Fox said.

“We are always looking for other people who are interested in dressing in historical clothing and participating in various events and reenactments,” he said.