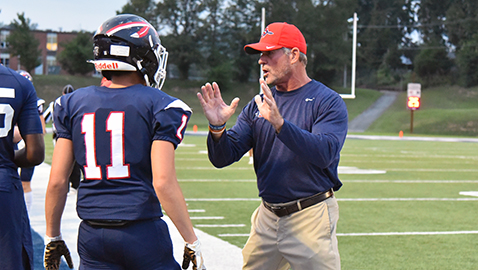 Clark Duncan has been on the cusp of playing for a state football championship at South-Doyle High School in recent seasons and got the Cherokees to within one victory of Cookeville and the finals this year.

In fact, he was the last prep coach standing in Knox County this season before he and his Cherokees lost 14-0 in the Class 5A semifinals at Blankenship Field in Oak Ridge Nov. 30.

His peers surely noticed that, but it wasn’t the only reason he was tabbed The Focus / Coaches’ 2020 Knox County Coach of the Year.

“Coach Clark Duncan is and has remained consistent as a respected coach in our profession,” said Farragut Coach Eddie Courtney Saturday. “His teams reflect his toughness, play with great effort and perform with class. His success has been the difference he has made in the lives of all his players.”

Duncan received 11 of 17 votes in the balloting for Coach of the Year. Courtney received three votes, while West’s Lamar Brown, Halls’ Scott Cummings and CAK’s Travis Mozingo got one vote apiece.

“It is a great honor to be recognized by your peers,” said Duncan after receiving the news Friday. “This recognition is due to a great effort by our coaching staff, players and support staff.”

South-Doyle finished the season with a 10-4 overall record.

Duncan, a former Unicoi County High and University of Tennessee football player, remains positive and will guide the Cherokees down a different path starting next season in Class 4A.

Duncan thought he was through coaching in 2003 when he went to South-Doyle High School and became assistant principal and athletic director.

His first sniff of a state title came in 1991 when his Panthers lost in the Class AA finals to Brentwood Academy.

“I thought I was through coaching and went to South-Doyle in 2003 as assistant principal and athletic director,” recalled Duncan.

“In 2009 I could not get anyone to take the South-Doyle job. I told the candidates the only reason that you will not be 0-11 is because we only played 10 games.

“The superintendent and Principal Rick Walker asked me to take it for one year. I took the job and we went 0-10. I tried to hire someone in 2010 did not get anyone to take the job. We won one game and were 1-9. Now we were 1-19 and I took it personal and said ‘we’re going to fix this.’

Duncan and Karen, who have been married for 40 years, celebrated the arrival of their newest grandson just days prior to the Oak Ridge game.