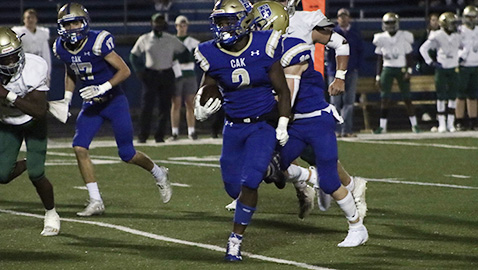 All of those spin moves by JD Dunn may have left Chattanooga Notre Dame’s football team a little dizzy.

Christian Academy of Knoxville’s exciting junior running back at times ran circles around the Fighting Irish Friday night in a 45-13 win at Warrior Stadium.

At other times, the 5-8, 165-pound workhorse carried potential tacklers on his back as he sniffed paydirt or scooted into the end zone before they could barely touch him or slipped out of a grasp in the backfield to get away for a long touchdown scamper.

He finished with three TDs and 217 yards on 23 carries.

Dunn’s best run of the night, however, may have been one he didn’t even score on. It included two or three spin moves for a 47-yard gain to the Notre Dame 12-yard line late in the first half.

While it didn’t produce points, it created oohs and ahhhs among CAK fans and old grads on this homecoming night.

Coach Travis Mozingo must have thought JD needed a blow after the spectacular play too as Dunn was taken out. Had it been near the end of the game instead of near intermission, JD may have received a standing ovation. His run was that good.

Fact is, Dunn is that good. Outside of Cedar Bluff, he may be the best kept secret on the local high school scene this season.

The victory was CAK’s seventh straight without a loss. The Warriors are 3-0 in the Class AA East Region with an open date this week before traveling to Boyd Buchanan Oct. 16. After that comes pivotal games against Grace Christian Academy and neighborhood rival Webb School that will decide the regular season championship.

“I tell you what, they’ve got a great football team,” said Fant. “We watched them on film and knew it was going to take a big feat for us to come in here and get a win.”

As for Dunn, Coach Fant said: “He has a low center of gravity and is hard to bring down, so he pops off things. We were very impressed with what he did tonight. We knew he was going to be our challenge and credit to their offensive coordinator; he kept feeding him the ball and he had a heck of a night.”

Notre Dame grabbed the lead on the third play of the game, taking advantage of “broken coverage” in the CAK secondary, said Fant, and Jalen Hagood scored on a 65-yard pass from Bennett Brinson.

Dunn scored his first TD on a 2-yard run to tie the score at 6-6 late in the first quarter, but it was the preceding play that was so impressive as he carried several Notre Dame players on his back on a 10-yard gain.

After senior JD Presley returned an Irish punt to the ND 26, the CAK offense shifted into quick tempo and Dunn dashed into the end zone from 10 yards out. Ross Badgett’s PAT kick made it 13-6.

CAK junior defensive lineman Malachi Harrison pounced on a fumble after the Warriors had a punt blocked by George Fillauer in the second quarter and Dunn cashed in with a 28-yard run after getting away from a defender behind the line.

Badgett booted a 23-yard field goal to increase the Warriors lead to 23-6 and CAK worked the clock to put another touchdown on the board before halftime. Sophomore quarterback Thomas Simpson and senior Caleb Sparkman hooked up on a nice 9-yard completion as time expired.

Dunn jitterbugged into the end zone for the 2-point conversion to make it 31-6.

Simpson tossed two more TD passes after senior Olivia Rodgers was crowned homecoming queen – a 27-yarder to Grant Sterchi and a 31-yarder to Chi McNeil-Harrison to make it 45-6.

With CAK subs finishing up, Notre Dame’s Charlie Menham caught a 44-yard pass from Brinson in the fourth quarter for the game’s final score.

Statistically, Thompson had a good game, completing 16 of 21 passes for 189 yards, three TDs and zero interceptions. He spread the ball around to five different receivers, with Presley leading in total catches with five.

Defensively, linebackers Luke Myers and McNeil-Harrison each had nine tackles. Harrison dominated the line of scrimmage with one sack, three tackles for loss and an assist. The D-unit also recovered three fumbles.