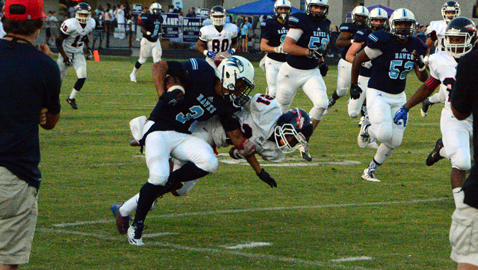 Aaron Dykes was a touchdown monster Friday night at Hardin Valley. The Hawks’ running back scored four touchdowns on 10 carries, tying a school record to lead Hardin Valley to a 47-7 win over the visiting South Doyle Cherokees. He finished with 177 yards.

In the first half, Dykes ran for 130 yards on 9 carries and three touchdowns, and the Hawks’ defense intercepted the South Doyle Cherokees’ Caleb Wender on three straight possessions to build a 19-0 Hawks’ halftime lead.

The best chance the Cherokees had for a first half score was on their second possession during the first quarter. Led by the strong running and catching of wide receiver, Ton’Quez Ball, South Doyle drove the ball to the 17-yard line, but kicker Austin Morse missed the 27-yard field goal.

“The o-line was opening up nice holes for me,” Dykes said. “I was taking advantage of it.”

Dykes struck again with 7:39 left in the second quarter on a 21-yard touchdown run. A botched extra point left the score at 13-0. That’s when the Cherokees’ turnover woes began.

Wender threw his first pick of the game to Nathan Berrier. Two plays later, Dykes ran for his third straight touchdown from 29 yards. Hardin Valley missed the two-point conversion but led 19-0 with 7:12 left in the half.

The Cherokees shot themselves in the foot again on two more interceptions on consecutive possessions. After Wender’s third interception, Hawks’ quarterback Gavin Greene threw a short pass to senior wide receiver Clay Thomas. Thomas was able to turn the short pass up the field and down the right sideline for a 76-yard touchdown and a 26-0 lead with 10:47 left in the third quarter. The passing touchdown was the second longest in Hardin Valley history.

“Thomas is very consistent in catching the football,” Hardin Valley Head Coach Wes Jones Said. Following a Cherokees’ punt, Dykes ran for a 34-yard touchdown, his fourth of the game, to tie a school record. The Hawks led 33-0 with 9:32 left in the third quarter.

South Doyle stopped the bleeding momentarily. Wender threw a 59-yard touchdown pass to Ball, who managed to get behind the Hawks’ defense. South Doyle cut the lead to 33-7.

It was short lived however. Following a 51-yard kickoff return, Greene flicked a 34-yard pay action touchdown pass to Clay for his second receiving touchdown and a 40-7 lead with 6:40 left in the third quarter.

“Once we get our run game going with Aaron and Colt and some of those guys, it really opens up the play-action pass, and that’s something we got to keep going,” Jones said.

To put the exclamation point on the victory, Hawks’ backup quarterback Braden Cloyd threw a 56-yard touchdown pass to Nolan Brown with 49 seconds remaining in the third quarter. The touchdown pass ended the scoring on the night and gave the Hawks a 47-7 lead, which they were able to run the clock out in the fourth quarter with the mercy rule.

Hardin Valley’s shortest touchdown of the night was Dykes’ 21-yard touchdown run. On their seven touchdowns, they accumulated 311 yards, for an average touchdown of 43 yards. The Hawks ran the ball 37 times for 244 yards, 177 of those coming on Dykes’ 10 carries.

“He’s just really explosive,” Jones said of Dykes. “He can step and lateral and go full speed. We challenged our kids to get better. We got to learn we cannot come out slow.”

Hardin Valley improved to 2-1 and hosts Kingsport Dobyns-Bennett in 6A regional play on Friday. “They have an excellent quarterback who runs the ball well,” Jones said. “Defensively, they got some fantastic linebackers. They’re a good football team. They’re used to winning. It’s our first time playing them down here, so we’re going to have to be ready to play.”

The Cherokees fell to 2-2 and play at Halls Friday night.