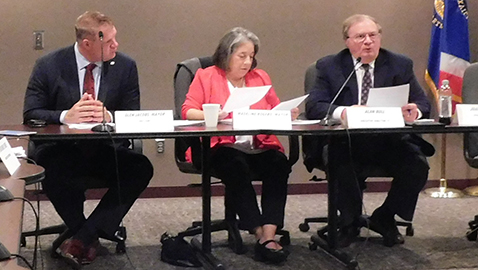 The E-911 Board of Directors is looking to hire a new executive director and Wednesday morning the board heard from Knoxville Fire Chief Stan Sharp on the search. Sharp told his fellow board members that the search committee is working on a new job description and obtained permission to start the search.

Interim Executive Director Alan Bull reported he wants to keep Blue Wing, the consulting group for the new radio system, working for a bit longer. He asked and received approval of $8,400 to finalize Blue Wing’s contract.

Chief Sharp said the finance committee is looking have E-911 employees join the state’s retirement “hybrid” plan and said the plan would be optional for current employees but all new hires would go onto the plan. Vesting is in five years and the plan requires a 2.5% investment which is matched by the system. Sharp said records of employment only go back to 1993 and asked for $549 to have the state check employment records earlier than that for vestment purposes.

Commissioner Brad Anders warned the E-911 board to “be careful with that” and John Fugate called the plan “the best option and plan for employees.” Mayor Madeline Rogero, who chaired the meeting, said she had the city finance director look into the plan and added, “I’m comfortable with this.”

The board gave its agreement for the finance committee to continue with joining the state plan.

Ted Hotz of Push CPA spoke to the board and said the firm is about to start the audit which will include retirement plans, liability, finances, etc.

While the E-911 system has purchased and is operating a next-generation radio system there are still some old radio systems being used that must be replaced by November of next year. The system has been paying $150,000 to maintain the old technology. Sharp reported that the city has an outdated alert system.

Bull said that starting this week the Karns area joins the system and the 911 facility will begin dispatching for that volunteer fire department.

The Technical Users Committee reported that the radio system is moving forward and the various users are learning how to properly talk on a digital radio system.

In public forum Ken Castle, board chairman for the Knoxville Rescue Squad, said his group always welcomes funds from the city and county and said, “It is important that we are a part of the system.”