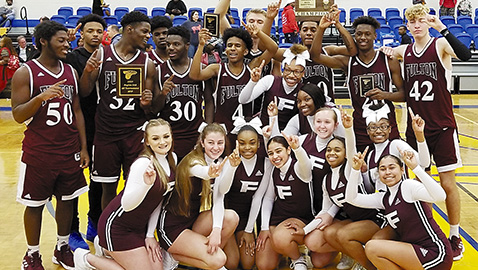 On Feb. 19, the District 4-AA rivals played Round 3 for the district championship. Unsurprisingly, the back-and-forth affair went down to the wire, as Fulton won 61-59 on a jumper by Tommy Sweat that just beat the final buzzer.

The teams were probably destined to meet yet again – in Round 4 – for the Region 2-AA championship, and on Feb. 28 at Gatlinburg-Pittman High School, that’s exactly what happened.

As expected, the game didn’t disappoint. Led by Tournament MVP Deshawn Page’s 15 points and seven rebounds, the Falcons (25-4) overcame a late, seven-point deficit to win 59-56, to add the regional championship to their district title. Jaiohn Foster’s three-point attempt to tie it bounced away at the final horn.

“That was just a typical Fulton-A-E game,” said Wright. “Came down to a couple possessions late. Dominic Holland made a good strong finish there. I’m proud of our guys for how tough we were.”

The game wasn’t real pretty. The play was physical and scrappy, and both teams committed numerous turnovers. A-E had a decisive 9-0 advantage in blocks, as well as slight advantages in both assists and steals.

Where the Roadrunners (23-5) arguably lost the game was at the free throw line, where they made only three of nine attempts. Fulton connected on eight of 12.

“We made crucial mistakes down the stretch,” Stanton said. “We got veteran players that are doing things that are just not what we do. We played selfish down the stretch. It was a selfish team down the stretch.  In the beginning of the game we played as a team and passed the ball around. We didn’t do that in the second half. We started playing one-on-one basketball.”

The first half was characterized by momentum swings. Down 4-2, Fulton ran off seven straight points to lead 9-4. A pair of layups by A-E brought the Roadrunners to 9-8. JaShaun Fenderson’s layup gave the Falcons an 11-8 lead after one.

In the second, Fulton extended the lead to 13-8 on a layup by Page, but A-E tied it on a jumper by KaJuan Bullard and a trey by LaRon Dixson. The Falcons then ran off nine straight points to take their biggest lead, 22-13.

After trading buckets, an eight-point run by the Roadrunners tied the game yet again. Connor Haskell’s layup with one second left gave Fulton a 26-24 lead at intermission.

An 11-6 run In the third gave A-E a 42-35 lead with 1:23 left, but the final minute of the quarter might have changed the game. After a three-point play by Haskell, Fulton inbounded the ball at midcourt with four seconds left. Point guard Edward Lacey got the ball, took two steps past the midcourt line, and let it fly. The ball banked in, and A-E’s lead after three was but a single point.

A 7-0 run in the fourth gave A-E a 53-46 lead with 3:39 left. But down the stretch Page and Holland took control for the Falcons. A three-point play and put-back by Page, and consecutive layups by Holland gave Fulton its first lead since early in the half, 57-56.

“They were up six there but we got some stops,” said Wright. “They missed a couple one-and-ones which helped. Late in the game you gotta get stops and you gotta rebound.”

Lacey and Trey West each chipped in 11 for Fulton. The Roadrunners we led by Dixson and Ronney Pierson with 14 each.

Bullard, Dixson, and Pierson made the All Tournament team for A-E. Fulton was represented by Lacey, Holland, and MVP Page.

Both teams will play tonight (Mar. 4) in the sectionals. Fulton, state champions three years ago and runner-up in 2015 and last year, hosts Johnson Co., while A-E travels to Greeneville. The winners head to Murfreesboro for the state tournament starting Mar. 13.

“We can go as far our toughness takes us,” said Wright.