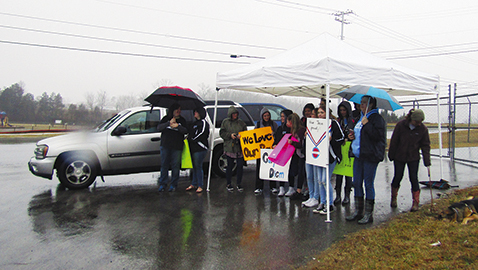 The Eagles, who have been recent regulars at the Class AAA State Duals in recent years, were reclassified before the 2017-18 season. And they claimed this season’s Class A/AA Championship with a 40-33 victory over Signal Mountain in a battle of Eagles on Saturday, Feb. 3 at the Williams County Ag Expo Center.

“This is really humbling and exciting,” said Eagles coach Tim Pittman, who arrived at Gibbs in the early 2000’s and began building the school’s program from scratch. “These are all Gibbs kids and I’ve watched them come through our youth program. I’m just so happy.

“I’ve watched them all grow up and come through our youth program. These kids and our coaches have all worked hard. The kids have trained hard. Wrestling is unlike any other sport. You put in a lot of time. It’s a mental and emotional drain. So, it’s nice to get the chance to let loose.”

In the championship dual, the Eagles darted out to an 18-0 lead as Elijah Lawson (195 pounds), Tyson Hefner (220) and Joel Griffin (285 pounds) all picked up victories via the fall.

In the 120-pound weight class, Gibbs High’s Yair recorded a victory when he pinned Kale Albritton 40 seconds into the second period.

Gibbs was welcomed back to Corryton by fans during a police escort Wednesday morning. And the fans who answered an early wake-up braved the pouring rain. Pittman said that he was happy.

“The community really supports us and the community is a big reason why we have so much success,” Pittman said. “It’s really great to have this kind of success at this level. This was always our goal.

“It was great to see those people Wednesday morning.”

The Eagles opened the State Duals with a 40-27 victory over Hixon. Gibbs edged Greenbrier 31-29 in the semifinals.

The Eagles will soon receive championship rings. The season, however, is not over. The Region Individual Championships were contested Saturday. Results were unavailable at press time.

Many of the Eagles will have the chance to make a return trip to Franklin on Feb. 15 for the individual State Meet.

“The biggest thing that I had to do was get our team re-focused,” Pittman said. “Because we can still win a traditional state championship; these kids can show what they can do.”