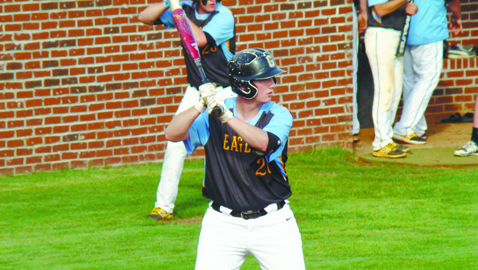 The Eagles got a stellar pitching performance from junior right hander Cameron Hill in a 4-0 victory over the host Panthers at Danny T. Maples Field.

That win, coupled with Gibbs’ 5-4 comeback victory over Powell on Tuesday at Steve Hunley Field, netted the Eagles (18-4 overall, 9-1 in District 3-AAA) the top spot in a hotly contested race.

Grim (3-1) retired the first 12 Eagles he faced and fanned four Gibbs hitters during that stretch.

Ironically, it was Hill, who reached base first against Grim. He singled to lead off the top of the fifth and was lifted for courtesy runner Dalton Shelbaugh. One out later, Shelbaugh scored on a two-run homer by Riley Williams that sailed over the left-field fence.

Hill said that Williams’ round-tripper changed the complexion of the contest.

“Once [Williams] hit that home run, it gave us a spark,” said Hill, who walked two and struck out 10 while surrendering just two hits. “Before that, we were struggling a little bit at the plate.

“It really feels good to leave here and be in first place.”

But he was masterful and dominant on the mound as he kept Powell off-balanced all night.

“He did a good job tonight,” Gibbs coach Geff Davis said of Hill. “His changeup was great and he throws [his fastball] at about 85-88.

“We played great defense behind him. With Cameron throwing, you probably have to make about 10 or 12 [defensive plays]. And we made the plays that we had to make.”

The Eagles scored two more runs in the sixth as designated hitter Blake Merritt drove in a run on a fielder’s choice with the bases loaded to make it 3-0. Gibbs added another run when Brennan Davis came home on a Powell error.

Hill hit Parker Stinnett with two down in the bottom of the opening frame and walked the Powell third baseman the fourth. Stinnett swiped second in the first. He, however, was gunned down trying to steal after he drew a base on balls.

The Panthers picked up their first hit in the fifth when Jonas Payne doubled but Hill would elude damage.

Powell mounted one last threat in the sixth as Courtney Payne led off with a walk and Mason King singled to put runners at first and second.

Hill again escaped as he induced a flyout from Shade Powell and fanned both Stinnett and Levi Everett to end the inning.

Hill closed the game by striking out the side in the seventh.