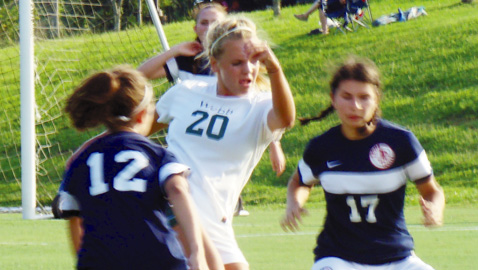 The Lady Spartans got off to a fast start and tallied four times over the first 40 minutes en route to a 5-0 victory over South-Doyle on a muggy evening.

Webb (3-0) darted to an early 1-0 lead when sophomore Sarah Satterfield scored in the eighth minute of the match against a young Lady Cherokees squad, which dropped to 0-3 with the road loss. Virginia Sances was credited with an assist on the game’s first marker.

Avery Catlett, an all-state standout for the Lady Spartans last season, extended the home team’s advantage to 2-0 in the 16th minute when she took a pass from Satterfield and put the ball past South-Doyle goalkeeper Aaryanna Billingsley.

Webb got its third goal of the match when Catlett, who finished with two tallies and a pair of assists, scored in the 19th minute. Sances added a late first-half goal to give the Lady Spartans a 4-0 lead that they enjoyed at halftime.

They kept the Lady Spartans at bay throughout much of the second half. Webb did fire nine shots on Billingsley after halftime. But the sophomore netminder stopped everything until the Lady Spartans got a tally from senior Darby Bauman in the 79th minute.

Both were Division II-East/Middle Division foes, and both are young programs.

“I knew this game would be tougher,” Webb coach Sonny Trotter said. “South-Doyle always plays us tough and [Lady Cherokees coach] Adam [Massie] always does a great job with his team.

Massie said he was pleased with his squad’s effort, especially after halftime.

“I think that once we see the ball go into the goal, that we’ll get some confidence,” Massie said. “The girls didn’t quit and they did a good job in the second half.

“That second half today was the best that we’ve played all year. We’re definitely improving and we’re just one pass away up top. If we can harness the second half, and play like that the rest of the year, that would great for us.”