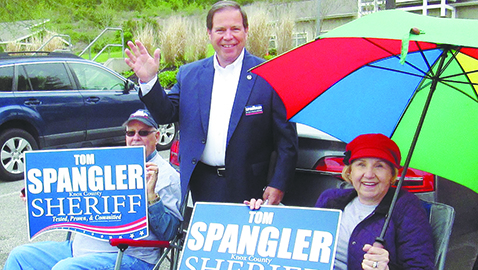 The Republican Primary for Knox County Mayor and Sheriff drew twice as many early voters as four years ago and spurred what is expected to be about 50,000 to 60,000 voters at the end of all voting on Tuesday evening.

Cliff Rogers, director of the election commission, told The Focus Thursday that despite the rains last week the turnout is about what he had hoped for. Even the Democratic Primary drew more voters than the previous election but Republican Primary voters outnumbered the Democratic voters about 6 to 1.

Total early voting and absentee ballots cast were 26,083. Thursday, the last day of voting, added 4,892 to the final count.

Rogers thanked the Knox County Commission for approving the rental of a larger space in the Downtown West Shopping Center, a precinct that always has a higher voting turnout than any other place in the county.

He said that 240,441 people are registered to vote in Knox County so the turnout, although the final turnout is heavier than usual, will be about 25%.