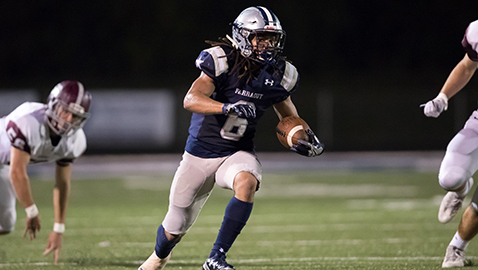 There are still ripples from that big splash Farragut High football made in 2016.

“Last season, I think the state championship helped us prepare each week,” recalled veteran Coach Eddie Courtney as preseason practice in pads got underway July 23. “Our kids handled the pressure to repeat well.”

The Admirals didn’t make another splash in 2017, but they made some noise. A 41-0 win over Oak Ridge certainly raised some eyebrows.

Moving back into the Class 6A ranks after capturing the Class 5A state title, the guys from Concord also extended their overall win streak to 19 games before falling at Kingsport Dobyns-Bennett 42-34 in Week 8. But they would see their season end in a second-round playoff loss to eventual state champion Maryville 38-6.

“I can still see some carryover going into this season,” added Courtney. “All the players who were sophomores two years ago and juniors last year, they now know what it takes.”

As Courtney heads into his 42nd season on the Farragut staff and 23rd as head coach, the Admirals have plenty to be motivated about this year. There’s always Bearden to circle on the calendar and they haven’t forgotten a 37-36 loss at new rival Hardin Valley Academy in their 2017 regular season finale. That made the Hawks’ season.

Farragut did bounce back with a first-round playoff win over Cleveland before running into Maryville and finishing 9-3 overall and 4-2 in Region 1-6A.

“I think every year a team has a different personality,” said Courtney. “Probably the biggest difference for us this season is we’re going to rely more on the running game.

“And I feel like we’ve got some depth at linebacker, so maybe we’ll do a little bit more defensively than we did last year.”

Courtney said the team’s strength is its skill position players. Its biggest concern is depth in the interior of the defensive line. He has plenty of guys to make things happen, with 80 on the varsity and 43 freshmen.

Isaiah Gibbs (5-10, 188) had 1,536 all-purpose yards last season as a running back, receiver, kick returner and punter returner. The UT-Martin commitment, who also will start at cornerback, rushed for 12 of his 14 touchdowns and averaged 5.9 yards per carry.

Jaden Gibbs is a 6-3, 185-pound wide receiver and defensive back.

“Jaden has a lot offers,” said Courtney. “He is trying to make up his mind where he wants to go. We have seven or eight guys who have already been offered a scholarship.”

Gavin Wilkinson and Jake Evans are competing for the starting job at quarterback, said Courtney. Matt White is challenging Corum at flanker. Wideout Jon Buell will start on the opposite side of Jaden Gibbs.

Farragut’s 3-4 defense has Keenan TerHark and A’koiyea Johnson battling at nose guard. Caleb Kuhn will start at one end post, while Billy Seal and Joseph Maw are competing on the other side.

Sophomore Eli Purcell (6-1, 210) will start at inside linebacker and Keathley at strong side LB. Jake Parsons and Joey Dietz are battling for No. 1 at middle linebacker. Neyland Harmon and Corum are competing at OLB.

The secondary will include cornerback Nathan Chandler and safeties Judah White and Hunter Shopovick.

Sophomore Daniel Bethel is expected to handle the punting and kicking duties.

The Admirals were scheduled to have their first scrimmage Friday at Ooltewah. They have upcoming scrimmages slated against Cookeville and Greeneville.

Farragut will host Bradley Central in its season opener Aug. 17.