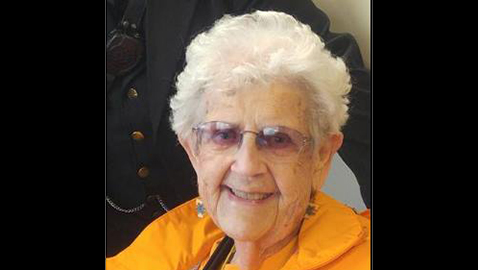 A Knoxville leader passed away this month. She influenced many people in her very active life and is recognized as the successful push to re-establish the name “Lady Vols” to all University of Tennessee Women’s Sports. The Knoxville native was a former school teacher, Tupperware Manager, and Christian Church member, Edith Williams is survived by her children, grandchildren, and many friends including public officials.

Edith seemed to know and influence everyone she met, reaching out personally and by social media to express her opinion and wishes, always to causes she championed. She loved singing and barbershop music, volunteered at Baptist and Tennova Hospital, and persisted until her passing.

The Focus contacted her son, Tom, who reviewed the story his mother wrote and added some information. Here is Edith’s story…

I’m a Knoxvillian.  I’m 87 years old.  I grew up on East 5th Avenue in what was then the best section in town, Park City.  Our house was gorgeous, built by my grandfather Thomas David (“Tom”) Huffine in 1916.  He died a few months before I was born on December 16, 1929.  According to my family, he was a real “character”, the good kind.  His wife, my grandmother Clara “Edith” Broome, was one of ten children of George and Elizabeth Broome who came over from England in the 1800s.  Edith Broome’s sister, my (great) “Aunt Nell,” along with her husband Will Whittle, owned the “Bud Ogle Cabin” at Junglebrook near Gatlinburg when I was born, and I remember playing there when I was young.  Edith and Nell’s brother George was the father of Harvey Broome, who helped form the Great Smoky Mountains National Park and the Appalachian Trail.

I was born Edith Gertrude Pickell at Fort Sanders Hospital, the first of three daughters of John Woodward “Pete” Pickell and Helen Catharine Huffine Pickell.  We grew up in First Methodist Church, which was downtown where the Hilton hotel is now, where my parents were married in 1928.  I was named for both of my grandmothers, the other one being Gertrude Woodward Pickell (pronounced “pickle”, like a dill).  She died when I was about 8 years old, in a fantastic Spanish style house that is still there in Sequoyah Hills.  (I guess Sequoyah Hills was considered the REALLY best part of Knoxville.  It had fancier houses than our Park City.)

I’m very much like my dad and my grandmother Gertrude.  Daddy could be walking down Gay Street by himself, when a man walked toward him, also by himself.  In five minutes, my dad would know everything about that man.  That’s the way I am too.  I always like to know about people I meet.

I was called Edie by my family.  When my mother wanted to name me Edith, after HER mother, my grandmother Edith said “well, you can name her Edith if you’ll promise never to call her Edie.”  Guess what… most of my friends call me Edie, because that was what my husband called me.

My husband was James “Alex” Williams, or “Willie” as he was nicknamed in the Navy (before I met him).  A lot of our friends called him Willie.  My family called him that too, until I told them all one day that his real name was Alex and he preferred that name.  At hearing this, my oldest niece, Marcia Bouska, said “we CAN’T call him Alex… he’s just so willie-ish.”  Alex and I met at UT in 1950.  We were introduced to each other by my best friend in Tri-Delt, Marilyn Means, and her future husband, Ralph Stuart Depew, Jr., when they first started dating.  Our first date was the Tri-Delt formal in May 1950.

Alex would now be 91, but he died in January 2013.  He was born on May 1, 1926, at home on a farm near Ripley in West Tennessee.  He joined the Navy when he was 18, knowing he would be drafted.  He was in the Navy for almost 2 years, at the end of World War II, working in the engineering department on troop ships going back and forth across the Pacific.  He came to UT on the GI bill in 1948 and shared a dorm room with Ralph Depew in Neyland Stadium.  One Sunday morning, Ralph invited him to go to church with him.  (Alex had grown up in a little Methodist church outside of Ripley and had been going to church anywhere he could walk to from campus.)  That Sunday, they walked from campus to First Christian Church (FCC) on East 5th Avenue.  (Ralph’s father had been a preacher in a Christian church.)  They started singing in the choir after their first Sunday there.

Music has always played an important part in my life, having grown up with piano lessons, chorus work, college music courses, and voice lessons.  I directed the Tri-Delts in All-Sing both of my years at UT, and we won both years.  Later in 1954, I began singing as the contralto soloist in the choir at FCC (with Alex, and Marilyn and Ralph).  I eventually became a member of FCC along with Alex.  Sadly, FCC closed in June 2015, but we shared many great memories there for more than a half century.

I’ll be putting this letter into a section I have in the computer called “Edie’s diary”…which I’ve promised my kids I’ll write someday.  I forgot to mention that we had four children, three boys and one girl.  We have five grown grandchildren.  Marilyn and Ralph had three girls and one boy.  They have LOTS of grandchildren, some great-grandchildren, plus a couple of great-greats.