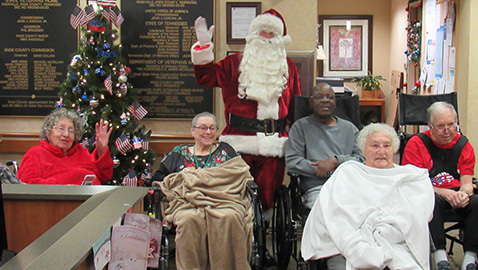 The Christmas holidays can be a happy and joyous time with family and friends. Or they can be anything but, for those who are alone, or need regular care. It can be an especially difficult time for the elderly or infirm.

Because of the generosity of the Knoxville Elks Lodge members and others from the community, some 140 retired veterans in Knoxville will have a Christmas this year much more merry than they otherwise would.

On Tuesday night, Dec. 17, members of the lodge, along with volunteers from the National Guard, hauled hundreds of gift bags from the Elks Lodge No. 160 on Lonas Dr. to the Ben Atchley Tennessee State Veterans Home in the Karns area. The bags were filled with wish-list items the veterans requested. It’s been an annual event since the home opened.

“For the last 14 years we’ve done this on a yearly basis,” said Gary Ellis, Exalted Ruler of Elks Lodge 160. “We have 50 to 60 veterans that we take. We tell the facility how many veterans we can take and they get the list together. When they established the veteran’s home, we started taking gifts to them every Christmas.”

Typical items in the bags are common daily things, mostly clothing and toiletries. Occasionally something extra like a DVD player or CD player is requested. Ellis said the Elks have never yet failed to meet a request. “We’ve never had an instance where we couldn’t fill it, so their lists are filled,” he said.

“We go to each one of our residents and ask ‘hey, what would you like for Christmas’ and it’s straight from them what their requests are,” said Terry Pate, director of activities at the home. “I would say 99% of the time they get everything that’s on their list.”

“As the director, I ‘say hey, stay within 50, 75 dollars.’ The people at the Elks Lodge can’t listen very well (as lodge member Yvonne Mullins nearby laughed) and they never stay within that guideline. One gentleman got a stereo; it was 150 dollars.”

The Ben Atchley Tennessee State Veterans Home opened in 2006. Atchley’s wife, Sue, was instrumental in making it happen. Atchley served in the Tennessee House from 1972 to 1976, and the Senate from 1977 to 2005 as a Republican. He was a UTK alumnus and veteran of the U.S. Naval Reserve. He died in Nov. 2018.

The facility has 140 beds and, according to Pate, a long waiting list. It offers short-term rehabilitation and long-term care for honorably discharged veterans, veterans’ spouses, and Gold Star parents (whose child died serving in the military).

Various churches, families, and others from the community donate to ensure that each veteran at the home has a gift bag, according to Pate. But the Elks are the facility’s biggest benefactor.

“Every resident here is adopted by the Elks or community people,” he said. “Some folks call up and say ‘hey, my family and I wanna do Christmas for a resident here.’ Our biggest support comes from the Elks. They’re our biggest supporter both at Christmas and throughout the year. They do ice-cream socials, cookouts … they’ve done flag retirements, they’ve provided funds for outings. They’re a very good partner and a great friend.”

The Oak Ridge Elks Lodge also chips in, according to Mullins.

Many of the home’s residents defy stereotypes of the elderly, said Pate, who started at the home in 2007 as a driver.

“There are some hip veterans here,” he said. “Some are well-versed in computers and iPads, and electronics. A lot of them are on Facebook.

“Its amazing the support we get from the Elks and from the community. Truly, our veterans go without nothing. If you have to be anywhere, this is the place to be.”