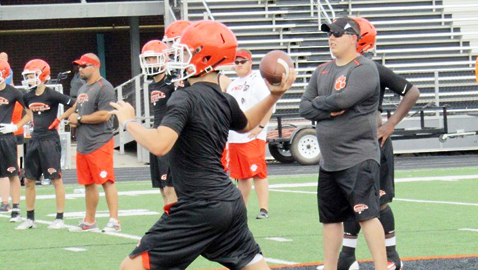 Change is in the air for Powell High football.

Rodney Ellison, beginning his third year as head coach after 2-9 and 1-9 seasons, has announced a new starter at quarterback. Six new assistant coaches also are part of his staff. And there is a feeling of new commitment among his players to get things turned around.

There are no guarantees that there will be huge dividends from these changes. But it’s certainly looking like the program is taking positive steps, and moving in a direction that really has only one way to go.

“It’s been tough,” said Ellison. “I knew when I took the job it was going to be a slow building process. I thought by the third year we could be a competitive football team.”

This is that year.

“Year 1 we had a good group that worked hard for us and got better and it paid off at the end of the year,” recalled Ellison. “Last year we didn’t have a lot of seniors on the team. We were a very young team and started several freshmen and sophomores, so Year 2 was tougher than Year 1. And of course, people start getting impatient, wanting to see wins.

“But I think we are on schedule with where we want to be,” added Ellison. “We’re going to be a more mature football team this year. We’re bigger and stronger and we’ve got more experience.”

Junior Carson Cole, who had been the Panthers’ starting QB since his freshman campaign, took the move like a true team player and told Coach Ellison he would help wherever needed. Ellison asked Cole to keep himself ready to play quarterback and also said Carson would be playing other positions, including free safety.

“This is the best staff we’ve had here,” said Ellison.

Powell will continue to run a spread up-tempo offense that never huddles and tries to get in as many plays as possible. Defensively, the Panthers plan to line up in a 3-4 full time this year.

Key losses off the 2016 squad include Hunain Rasheed, who was the team’s leading receiver the past two seasons; and two-way linemen Will Hoyle and Tanner Kesterson. Also gone are all-region players Eric Ludwig and Kamari Smith. Ludwig, the Panthers’ leading tackler at linebacker, is now playing at Kentucky Christian. Smith had five interceptions at cornerback.

Two-way starters Alex Hart (senior slot receiver and free safety) and junior Riley Bryant (slot receiver and strong safety) are among the top returnees. Preseason All-State noseman Alvin Stacy (6-0, 290, junior) and sophomore standout Bailor Walker, who will start at cornerback and fill in at running back and slot receiver, also are among leading returnees.

Trusley won a three-way battle for the quarterback job.

Seniors Wesley Hardin and David Robbins are two solid inside linebackers and also will contribute at fullback when the offense is in a two-back set.

Sophomore Michael Treadwell (6-0, 260) is the team’s top offensive lineman at left tackle. He started all 10 games as a freshman. Senior Brandon England (6-1, 245) is an experienced center.

Senior Jonathan McQueen (6-0, 215) will start at running back and sophomore Eli Owens will start at outside linebacker. The two also will back each other up.

Nick Moore, a senior wide receiver and cornerback, may be undersized at 5-9, 150, but he plays with more heart.

So far junior place-kicker James Hyman is perfect. Also a soccer player, Hyman kicked 14 of 14 PATs and was good on his only field goal attempt last season.

“We’re still starting a lot of sophomores and juniors now,” said Coach Ellison. “The seniors that we have – and there is only nine or 10 of them – are good football players that are working hard and very coachable, so I think that’s just enough seniors to give us some good leadership and push us in the right direction to get better this year and have a more successful year and be more competitive.”

In the TSSAA’s new two-year classification period, Powell is a member of Region 3-5A, along with Oak Ridge, Fulton, West, Campbell County, Clinton and Karns.

The Panthers will play their first four games on the road, including the opener at rival Halls on Aug. 18.