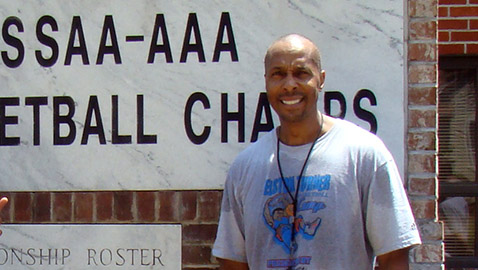 The City of Knoxville is honoring basketball great Elston Turner today (Feb. 21) with a street bearing his name.

Elston Turner Drive, a fitting name for a player who often drove inside to score as well as swishing in points from the outside, will be celebrated in the new Austin Homes area in East Knoxville with a ceremony beginning at 4:30 this afternoon.

The street to be renamed is Burge Avenue and is located between South Bell Street and Harriet Tubman Street.

Gwen McKenzie, who represents the 6th District of the City Council, applied for the street’s new name to honor Turner.

Elston was the captain of the team, which posted a 34-2 record, and named the MVP of the state tournament.

Turner went on to have an outstanding college career at Ole Miss (1977-1981), often giving Tennessee fits when the Rebels and Vols played each other in the SEC.

He was a second round draft pick of the Dallas Mavericks in 1981 (43rd pick overall) and played as a shooting guard / small forward with three different NBA teams over eight seasons. He later played in the CBA and professionally in Europe for five more seasons.

In 1996, Turner returned to the NBA as an assistant coach and, except for one season, has held an assistant position for six different teams, including this season with the MinnesotaTimberwolves.

As a way to give back to his hometown and alma mater, Turner, who was inducted into the Knoxville Sports Hall of Fame in 1994, has conducted an annual summer youth basketball camp at Austin-East for nearly 40 years. Proceeds from the camp are donated back to A-E and the Clifford Ross Foundation.