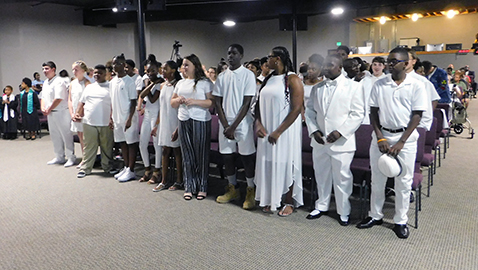 The graduation ceremony for Knox County’s first charter school was held Wednesday night at Overcoming Believers Church in East Knoxville. The school is part of the Emerald Youth Foundation, an inner city youth and family ministry.

Emerald Youth Foundation Director of Marketing and Public Relations John Crooks said that it represented a special occasion for the school.

The graduates may be finished at Emerald Academy but Crooks said that the administration and the foundation will track the students’ progress.

“They’ll move on and go to a traditional high school and it will likely be the high school that they’re zoned for,” Crooks said. “We’ll track and keep up with their progress as closely as we can.”

The graduates had ribbons pinned on them as a reward for graduating from the academy, which will expand to K-8 next year.

“We had about 60 graduates and the ribbon signifies their graduation,” Crooks said.

The school’s motto is “Scholars into Leaders.”

Valedictorian Ellie Arwe spoke about what it meant to be an Emerald Scholar. She was one of several students to be recognized Wednesday night.

OBC pastor Daryl Arnold officiated the ceremony and teachers Deangelo Adams (who directed the Emerald Academy Choir at the graduation) and Christy Bennett also received Founder’s Awards for their contributions above and beyond the call of duty.