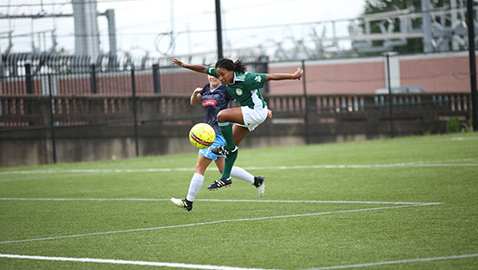 The 2018 season has been tough for the Emerald Force women’s soccer team. The team closed out the home portion of its regular-season schedule with a 5-1 Women’s Premier Soccer League loss to Chattanooga FC Thursday night at the Sansom Family Sports Complex’s H.T. Hackney Field.

“The girls have other commitments. The girls never gave up. This is a good, fun, and competitive summer league for the girls.”

But on this humid and overcast night, it was Chattanooga that won the conference crown.

The visiting club’s fans invaded Knoxville Thursday night and celebrated the title with their team.

“Our fans traveled well. They came here and supported us when we really needed them,” Chattanooga FC coach Erin Ridley said. “We had a really good game tonight and our fans have traveled with us all year.

“They create a great atmosphere for us wherever and whenever we play. They’ve been great for us.”

Chattanooga (6-1) started the scoring early as it tallied three times in the first half. The visitors scored in the fourth, 16th and 23rd minute respectively.

Chattanooga got a hat trick from Cass Wade and two more goals from Jess Shepherd.

Fernandez could only tip his hat to Ridley and her side after the match.

“Chattanooga clinched the championship tonight and they deserved it,” Fernandez said. “They’re good.

“We had a tough night and it’s been a tough year. But we’ve won two of the first three league titles. But Chattanooga is good and they deserved to win.”

Chattanooga FC scored two more goals early in the second, putting the Force in a 5-0 hole, but Fernandez commended his squad for hanging in the game and not quitting.

“After the early part of the second half, we got it together and we really played pretty well,” Fernandez said. “Our girls didn’t give up.”

Emerald Force avoided the shutout when Magda Mosengo scored in the 80th minute.