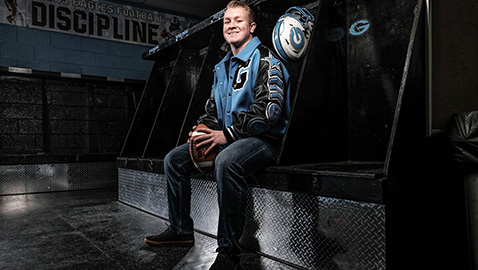 On Friday nights, Ethan Humphries reminded many football fans of the days when the game had big, strong fullbacks.

Give him the ball and let him go to work.

As the game wore on, Humphries seemed to get stronger and harder to bring down.

But there is so much more to this young man.

“Ethan is a class act,” said Brad Turner, Gibbs High head football coach and Strength and Conditioning teacher. “He is everything you want in a student-athlete.”

It’s no wonder Humphries is the school’s male Student-Athlete of the Year.

“He is very motivated and pushes himself to be the best on and off the field,” said Turner. “That starts at home with his parents. Ethan and his brother Wyatt both played at Gibbs and they are very mannerly and ‘yes sir, no sir’ guys. Their parents were very involved in our program and this community.”

A powerful running back, Humphries (5-10, 220) was a four-year letterman and team captain for the Eagles.

As a senior, he rushed for 1,433 yards and 14 touchdowns and was named to the All-Region 2-5A team for the second time.

Humphries will continue his football career at Centre College, a NCAA Division III school in Danville, Ky. The Colonels are members of the Southern Athletic Association.

“Ethan was dependable for us,” said Coach Turner. “He took care of his body and really excelled in the weight room and conditioning his body to play a lot of snaps.

“Ethan was a very physical player and especially late in games he seemed to have more in his tank than anybody else.”

That’s just what you saw on Friday nights.

Humphries was a three-time Eagle of the Month inside the school.

Ethan also was a Link Up Executive Board member, which involved helping incoming freshmen with how to go about high school. He was a HOSA member, which deals with health science. He has a CNA license (Certified nurse assistant). And last but not least, he’s a member of the Fellowship of Christian Athletes.

“Ethan’s academics speak for themselves,” added Turner. “He has a 4.3 GPA and in all honors classes. He managed his time and gave his all to everything he was involved in.

“From what I understand, he wants to be a surgeon and major in pre-med.”