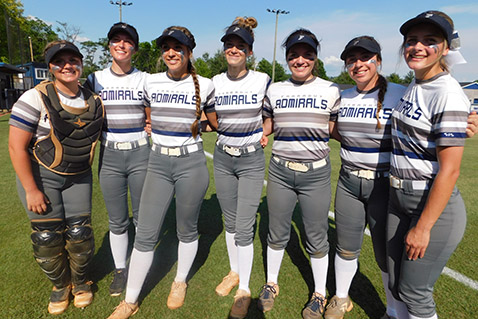 Losing seven seniors who contributed to back-to-back state softball championships, 80 victories and a ton of fun the past two seasons is quite a loss.

“I am sad to see them graduate, as they were freshmen my first year as head coach,” said Green. “I am happy to see them move on to their next phase in life (college) and that so many of them will get an opportunity to play softball in college.”

Six of the seven seniors were starters on both state title teams, including this season’s District 4-4A Player of the Year Lauren Brakovec and District Pitcher of the Year Avery Flatford.

“This year’s team had confidence in their abilities, the experience of winning a state championship, but also high expectations and the stress of competing for another state title,” said Coach Green. “They worked together and overcame several forms of adversity before and during the season. We were able to keep our sights on the goal directly in front of us without looking too far ahead.

“We will have several holes to fill for next year and there will be opportunities for our next class of players to make their mark on the Farragut softball program.”

Following the game at Alcoa this season, the Farragut coach was asked to compare the 2022 team with the 2021 team. He said he thought the 2021 was better overall, but the 2022 team was good enough to win a state title, too.

“The answer would still be the same only because the 2021 team was able to do so many things offensively,” Green said after this season ended. “That team hit for a very high average, hit for power and we had several left-handed hitters that were able to hit and play the short game. We were very fast (stealing 130 bases).

“The 2022 team was definitely a great offensive team in their own right, but we were a little one dimensional in that we lacked the abundance of left-handed speed and the short game. But what we lacked in speed, we made up for in power hitting with 50 home runs (compared to 30 HRs in 2021).

“The 2021 team had a deep bench with several reserves that could have started most any other year. The 2022 team did not have that luxury; we had several departures from last year and during the preseason.”

Looking back, however, it really all evened out.

“The 2021 team may have been better, but the 2022 team’s achievement was probably greater due to the high expectations and adversity,” said Green.

Sophomore right-hander Emma MacTavish pitched well when Flatford was forced to miss some games due to shoulder issues. MacTavish ended up with a 20-2-1 record and a 2.09 ERA. She struck out 100 batters in 127.3 innings, while giving up 111 hits and 33 bases on balls.