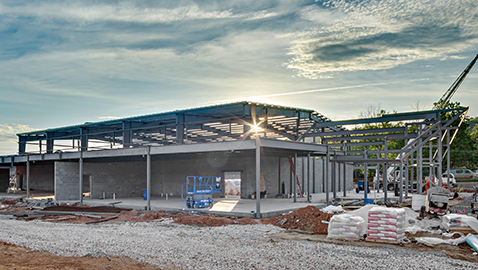 The Emerald Youth Foundation is bringing a health center to the Lonsdale Community.

Plans for the center, which will be located at the foundation’s Lonsdale Ministry Complex, were announced early Friday the Emerald Youth Foundation’s prayer breakfast at the Knoxville Expo Center’s Grande Event Center.

The breakfast, which was hosted by local television news anchor Ted Hall, is one of Emerald Youth’s annual fundraisers.

The new health care center will be a joint effort of the Emerald Youth Foundation, the University of Tennessee Medical Center and Cherokee Health Systems.

Cherokee Health Systems will oversee the day-to-day operations of the new health center and Cherokee Chief Financial Officer Jeff Howard said that it would be similar to the company’s health facility, which is located on Western Avenue.

“While our center on Western Avenue is close to Lonsdale, we find that the smaller health centers in the communities work better,” Howard said. “We’ll have doctors in Lonsdale but we’ll also have telemedicine, so if we can’t get a specialist in Lonsdale, we’ll be able to dial one up and see them on a video for a video conference.

“We’re excited for this opportunity to work with the Emerald Youth Foundation and UT Medical Center.”

Howard noted that the center will also look to provide dental care at some point in the near future.

Substance abuse counselors will also be available at the Lonsdale Health Center, according to Howard.

Kevin DuBose, director of area ministries for Emerald Youth in Lonsdale, said the center is sorely needed in the community.

“Lonsdale is a special community. It’s one of Knoxville’s poorest,” Dubose said. “Its residents don’t have access to some of these services. It’s hard for its residents to get those services.

“All the children there need transportation and it’s a food desert and they just don’t have access to medical services. Most of the population at Lonsdale Elementary School is non-English speaking.”

One 16-year old high school student went to DuBose in search of a driver’s license. She served as the translator for a non-English speaking family.

“She didn’t want a driver’s license just so she could hang out with her friends,” DuBose said. “She lives with her grandparents and she’s their primary caretaker. She also serves as the translator for her family.

“She needed a driver’s license to get her grandparents to their appointments.”

The health center will be independently operated by Cherokee Health Systems and will provide a continuum of patient-centered services with an emphasis on wellness and prevention, as well as the treatment of acute illnesses and chronic conditions.

“We were giving prescriptions and filling them wasn’t possible because people had to choose whether to fill a full prescription or eat and that’s not much of a choice.

“We’ll be concerned with education so that people may lead a full life. For example, two-thirds of all cancer can be prevented if you eat five servings of fresh fruits and vegetables and you exercise every day. Then you have people who say they can’t exercise because their neighborhoods are not safe and the streetlights don’t work.”

The Lonsdale Area Ministry Complex is home to several athletic facilities, including a pair of synthetic turf fields, two full-length gymnasiums and a workout facility, which includes a weight room.