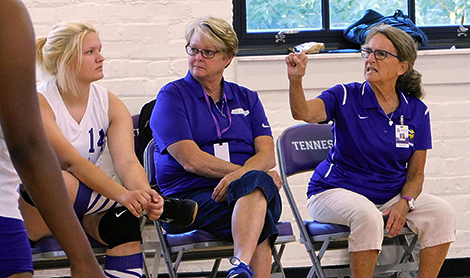 Jeanne Fair and Sharon Brown have coached everything but football at Tennessee School for the Deaf.

And after a combined 76 years, the two are still at it and having fun.

Fair is in her 44th year coaching at TSD. Most of that time, she’s been the swim coach, but also has been girls track and field coach and now is in her second season as the Lady Vikings’ head volleyball coach.

“She’s an icon here. I mean she really is,” said TSD Athletic Director Luke Benson last week prior to a volleyball match against visiting Cosby High School. “She has given so much of her life to this school. She’s an icon at TSD.”

Brown, who had been volleyball coach at Maryville College for nine years, took a teaching job in the PE and Health Department at TSD in 1984 and became assistant volleyball coach for one season under longtime head coach Patsy Smith.

That one season has turned into 32.

“Sharon Brown has given so much to TSD,” said Benson. “Her contributions to our Athletics Department through coaching several sports are immeasurable. She has been enormously helpful the last few years by sharing her wealth of volleyball knowledge with our new coaches. I am thankful she is with us here at TSD.”

Fair assisted Brown in volleyball from 2003-16.

Like Fair, Brown also has worn multiple coaching hats at TSD, working in swimming, cross country, track and one season in girls’ basketball.

Ashley Allis also was hired this season as an assistant coach in volleyball.

“I’m going to teach a couple more years,” she said. “I still love it.

“We’ll see how much longer I can survive in the coaching world.”

The Lady Vikings lost their district match to Cosby 25-6, 25-11 and 25-17. Hailey Robinson set up senior teammate MarCreshia Phillips for several points to lead TSD in the loss.

Katie Susualla served 12 straight aces to get Cosby rolling. Megan Miller stood out as an outside hitter for the Lady Eagles from Cocke County.

Earlier this season the TSD girls won five matches to take top honors in the Preseason Spike-Out Classic at Kentucky School for the Deaf in Danville, Ky. The Lady Vikings defeated deaf teams from the Atlanta Area, Georgia, Michigan, Kentucky and Atlanta Area in the finals.

The Lady Vikings were scheduled to go to Alabama School for the Deaf at Talladega, Ala., for the Southern Spike-Out last Friday and Saturday.