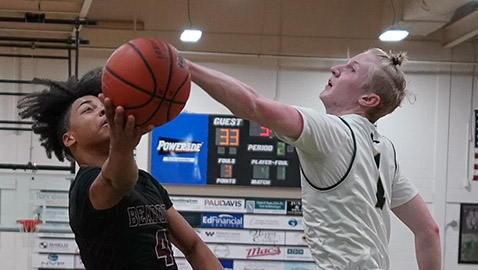 Veteran Fulton Coach Jody Wright had five sophomores and a freshman on his 11-man roster this season and three of his 10th-graders were starters.

One could have called it a kiddie corps, but they were too good for that.

The young Falcons advanced to the TSSAA Class 3A state tournament in Murfreesboro and rolled past Fayette-Ware 78-57 with a sizzling shooting performance in the quarterfinal round.

Unfortunately, they followed that up with one of their worst shooting halves of the season in the semifinals against Jackson South Side, but overcame it and had the lead going into the final period before falling 51-50.

Being outscored at the free throw line by 12 points was a key factor in Fulton being eliminated. But in his post-game comments, Coach Wright focused on the positives and the future.

“It was fun to watch them on this stage and I think they answered a lot of questions,” said Wright in the media interview room at MTSU’s Murphy Center. “And to get to the semifinals with starting three sophomores and playing four (including PG/W Dexter Lewis), I think that’s a testament to them and their ability.”

Lee, who fouled out during the fourth quarter, said he felt anger and motivation after the game.

“You just gotta keep going,” he said. “On to the next man.

“But next year we’re definitely going to be back.”

FULTON ‘D’ PRAISED: Jackson South Side Coach Damonn Fuller ranked the Falcons’ defense “by far No. 1” among the teams his Hawks had played. “They are very aggressive and very physical and it’s something we just don’t see every night.”

MIGHTY MOSELEY: In addition to tying the title game with his 3-pointer from the corner with one second to go in regulation, Bearden senior Hayden Moseley may have had the most productive game of his career. He scored 25 points, connecting on 10 of 14 field goals, including two 3-pointers, and 3 of 3 free throws. He also had 11 rebounds, five steals, three assists and one blocked shot.

The 6-3 wing and co-captain was an All-District 4A honoree, a “defensive stopper” and led Bearden in dunks, with the Dawgs having over 40 of them in the regular season.

HALLS MARKSMAN: Caleb Shaffer, a 6-1 junior shooting guard, made 45 percent of his 3-point attempts this season and averaged 3.5 treys per game.

“Caleb is one of the best catch-and-shoot players in Knoxville,” said Red Devils Coach Clint Sharp.

Coach Sharp called the 5-10 Simpson, a three-year starter, ”one of the most well-rounded players in Knoxville. He is also a terror on the defensive end, as he always guards the other team’s best player.”

IN THE CLUB: Will Biven of West and Blue Cain of Catholic joined the 1,000-point career club this season, while the Irishmen’s B.J. Edwards, The Focus / Coaches’ Knox County Player of the Year and a UT signee, surpassed the 2,000-point level.

Turner led the Eagles in scoring, averaging 15.6 points per game, while Lindsey, a 6-8 center, averaged eight points and five rebounds per game for the Irishmen.

RED FLAGS: In Bearden’s 69-60 state title loss to Dobyns-Bennett in Class 4A, the Dawgs’ Elijah Bredwood, a Mr. Basketball finalist, got his second foul with 3:22 remaining in the first period and Bearden trailing 10-2. Teammate Darian Bailey, another key starter, picked up his second foul early in the second period.

Being in foul trouble most of the game prevented Coach Jeremy Parrott from going with full-court pressure sooner than he did. The Dawgs’ pressure in the fourth period was the key to Bearden erasing a 15-point deficit.

Bailey ended up fouling out in the fourth period and Bredwood got his fifth foul with 1:25 left in OT and Bearden down by three (59-56). D-B outscored the Dawgs 10-4 the rest of the way.