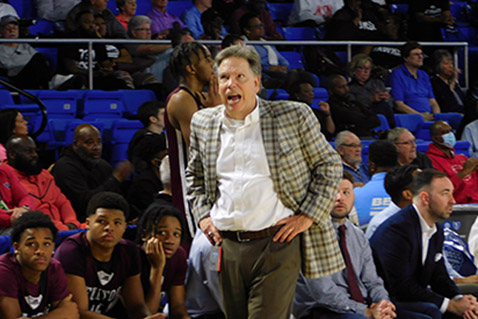 Denaj Kimber’s shot from the left wing in the closing seconds was just short and so was Fulton’s attempt Friday to advance to the TSSAA Class 3A title game.

Jackson South Side finished on the winning side of a 51-50 score in the semifinal game at Murphy Center in Murfreesboro.

The Falcons’ season ended with a 30-6 record. The Hawks (25-3) advanced to Saturday’s championship game but lost to Greeneville 77-48.

Based on the game’s stats, Denaj may have been the right guy to take the last shot at victory for Fulton. Possession of the ball came quickly and only a few precious seconds remained. There was no time for discussion. Only time to react.

Denaj Kimber led Fulton with 13 points. His brother Taj Kimber, also a guard, had scored 12 points. Both were 5 for 10 from the field.

Tyler Lee, a 6-4 forward, had scored 11 points for the Falcons before fouling out.

Jackson South Side led 8-4 after one period and 20-15 at halftime before Fulton moved ahead 34-31 by outscoring the Hawks 19-11 in the third period.

The final eight minutes were nip and tuck to the end.

After the game, veteran Fulton coach Jody Wright was asked what he felt was the difference in the game.

“I don’t know if it’s one thing that I could say that really swung the game.

“It was a game of little runs and big emotions. I thought both teams competed really hard and I have a lot of respect for South Side. We’ve played them down here a couple of times. Coach (Damoon) Fuller does a fantastic job and is a good coach. His kids play hard. I don’t know that we got beat, we just run out of time today.”

Fulton advanced to the semis with an impressive 78-57 quarterfinal win over Fayette-Ware (26-7).

The Falcons had a great shooting performance in that game, hitting 56 percent from the field, and making five of 10 from 3-point range and five of six free throws.

Lee made 9 of 10 from the field and also grabbed eight rebounds.

Denaj was 7 of 13 from the field, including 4 of 5 triples, plus had five assists. Hatchett was 6 for 9 from the field and also had six rebounds and four assists. Taj made 6 of 12 of his field goal attempts.