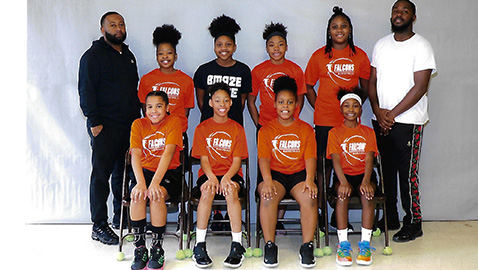 Nathan Nease said there was a “buzz” about one team in the City of Knoxville’s youth basketball program this season.

Nease, the Athletics Coordinator of the Knoxville Parks and Recreation Department, was referring to the Falcons Orange 10-and-under girls team that played in a boys league and eventually placed runner-up in the finals of the 10U Boys Gold Division in the post-season tournament.

“They ended up losing to EKAA-Wydner,” said Nease. “Great games!”

The East Knoxville Athletic Association team and the Falcons played each other three times in the double-elimination tournament. The Falcons’ girls defeated EKAA 28-19 in the first round, but the EKAA boys climbed out of the losers’ bracket and beat the Falcons 26-22 and 21-17 in the finals on Feb. 22 at the Christenberry Community Center.

“They weren’t happy about it,” said Shavar Young, who coached the talented girls team, which also had played in a boys league last year under another coach.

But Young said they got over the loss pretty quickly and he reminded them they had “accomplished what they set out to do” and that was to get ready for middle school basketball next season.

“We didn’t win the championship, but we made it to the finals and that’s good for a girls team,” said Young.

“It’s a pretty good group, and their parents put a lot of time and money into them for training,” said Young, explaining why the girls played in the boys league. “We’re basically trying to get them ready for middle school basketball – the toughness of it and all of that.”

Young said EKAA coach JaMichael Blair knew his team was in for a battle in the title game.

“He told his boys that if they didn’t win the first quarter, then they were going to be in for a dogfight in the second half,” said Young.

The Falcons Orange had a 6-2 record in the regular season against the boys.

“They came to practice ready to work,” pointed out Young. “I was hard on them. I told them I wasn’t going to take it easy on them because they were girls. They wanted to finish the season. I was just proud of them for that.”

Young said he believes the girls knew he wanted to bring out the best in them.

Finishing in second place in the boys tournament “was a good thing for them,” he said.

New Knoxville Falcons Commissioner Robert Stokes remembers being “wowed” by the girls team when he first saw them practice and scrimmage a couple of boys teams at the beginning of the season.

“What really impressed me was the way they played as a team,” added Stokes. “It wasn’t just one person doing it all. Every person on that team had a job to do when they stepped out on that court.

“I noticed as well that these girls were bigger than the average 10-year-old boys. They had a lot of endurance and got down and physical with the boys.

“Shavar and his wife Alicia coached these girls with such emotion and excitement; you would think you were at a high school championship game. These girls will have a bright future. I’m just glad they played with the Falcons’ organization.”