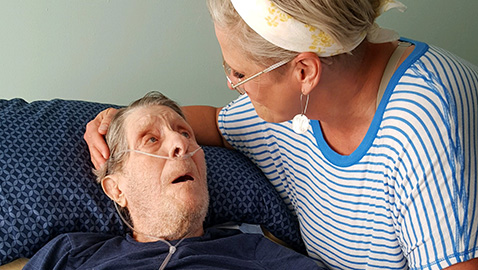 He’s finally back home and recovering but the difficulties and worries that his family faced while he was in the hospital during the pandemic is a heart-wrenching story that must be told.

The 85-year-old West Knoxvillian lay in Parkwest Medical Center several weeks ago  awaiting surgery for his broken hip. Mostly deaf and confused, Franklin Davis Wills was alone and could have no visitors because of hospital policy due to the coronavirus pandemic.

One of his daughters, Missy Shorter, was panicked and concerned about her 77-year-old mother wanting to be with Wills during the ordeal. Missy and her husband, Mike, began a frustrating effort to see her father.

“We’ve been trying to get in to see him,” she told The Focus. With the help and advice of Knox County Commissioner Charles Busler she was reaching out to anyone who could help. She called Congressman Tim Burchett who told her the no visitors policy was not a state or federal ruling.

“We haven’t seen him since he left by ambulance and my mother is getting really nervous,” Missy said. “He cannot hear and cannot comprehend what’s happening. He keeps calling out for his wife and children.”

“They’re keeping people out because of the coronavirus,” she said. The hospital said that visitors could wait outside in their cars if they wished.

Busler, The Focus, and others contacted the hospital. Missy said she told the hospital his family would pay for virus testing if they could be admitted to visit with him. Her pleas and prayers led to her being told that one family member would be allowed to see him after surgery when he would be taken to a 4th floor room in a non-virus section. That word came from a nurse supervisor.

Missy was ecstatic learning she or another family member would be allowed in the room to see him. “All I needed was someone to help us and because of that help and the most high God they’re going to let me in,” she said.

Area hospitals, including Parkwest, soon after announced a “phased reopening” that included visitation that allow visitors who are determined to be vital to the care of the patient and mandated that all visitors should wear a face covering at all times and be screened prior to entry.

On the day of the Wills’ 57th wedding anniversary, Franklin went to surgery and his wife, Evelyn, was permitted in the surgery waiting room. There were some complications and, following surgery, he was taken to the critical care unit rather than the 4th floor room.

The next morning Missy said a nurse told her that Franklin was waking only for a moment and going back to sleep. He was complaining about shoulder pain and the family was waiting for a call from the doctor.

Two days later Mike Shorter said that his father-in-law was doing better, sitting up in a chair to eat, and the hospital told the family Franklin might be moved out of the CCU and into a room. Missy was permitted to stay with her father that evening and said he had been sitting up and drinking water.

“I think this is my last run,” Missy said her father told her.

She said that the next day the hospital talked her mom into transferring Franklin to NHC in Farragut despite the family trying to get the transfer two days later. Missy said the hospital said he needed therapy and there was only one bed open at NHC.

“Mom said she felt like she had no choice” in deciding to agree to the transfer. Missy said she left the hospital mad with the idea, “Here we go again.”

Missy said her dad was unresponsive after the transfer and the NHC nurse said that if he can’t do rehabilitation therapy he can be sent home. “For the moment we’re back to square one—not able to see him,” Missy said at the time, adding they could get an update of his condition by telephone.

Three days later she reported they had visited with her dad by watching him through the window. The staff there had turned his bed so he could see the window and he waved to them.

Missy said that Franklin was on a pureed diet and had a bit of therapy. She said he’s “rigid and frozen” and wasn’t using his left arm.

“He’s stubborn and 85 years old and they said he was taking a lot of fluids,” she said, again saying no one was allowed in his room to actually see and talk with him. She said the center’s COVID-19 precautions got him a private room.

“I’m going to pick up my mom now and we’re going back down to his window to see him. My mom is 77 and not resting or sleeping. We’re taking him some chocolate,” she said.

“I’m just praying to the Lord that His will be done,” she said.

Two weeks ago Franklin was cleared to go back home. Missy went over to her dad and mom’s house to get it ready and a hospital bed was delivered. They were hoping that Franklin would perk up when he got home and were thankful that they can visit and take care of him.

“He’s got his senses back and he’s eating. He’s still bedridden but has a hospital bed,” he said.

Missy said Franklin has hospice care with visiting nurses. She also said her mom is doing pretty well taking care of him and that the family also goes by each day to help and check up on them.

The COVID-19 pandemic has caused a lot of people problems well beyond the basic strategy of staying safe. There’s little worse for a family than to have an elder member injured and hospitalized under normal times but not being able to see them except for looking into a window causes a heavy burden of worry and frustration.

Having a dear one return home and begin recovery eases the pain of separation. Just being able to visit with someone and hug them is a huge release for family members.