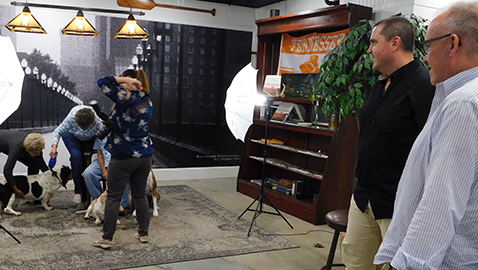 Seeing people taking their pets to get a photo with the Easter Bunny or Santa gave Cameron Brooks an idea. The Knox County Election Commission member, realtor and former Democratic Party chairman decided to try out the idea.

When Farrah Williams-Deck of Farrah’s Photography agreed to take the photos, Brooks had a crew together for the task.

“We do all types of photo events such as weddings, events, and people occasionally want to include their pets,” Williams-Deck said.

The date was set for Sunday, May 5 and by 11 a.m. that morning, Brooks, Strum and Williams-Deck were at the store. The crew no sooner got set up when people started arriving with their pets. Brooks told The Focus that the pets and people would be arriving in shifts of about 15 minutes and already 32 families had reserved a time. One of the families to arrive was Mary Constantine, a retired feature writer for the Knoxville News-Sentinel, with her husband, Matthew Graveline, and their three dogs, Piper, Blu Jeans and Millie. All three family pets are rescue animals from East Tennessee Boxer Rescue and Belly Rubs Bassets.

With only a little leash entanglement and lots of laughter, the couple and pets settled in and the photo was taken. When Constantine asked how much of a donation that Brooks wanted he told her the photo is free and she would be getting a 5 by 7 professional photo in the mail.

“This is the first time we’ve done this and I thought people might like it,” Brooks said.

As an affiliate broker for Realty Executives Associates and dog lover, Brooks believes in protecting his client’s interests and is committed to supporting animal rescue groups.

After Constantine and Graveline left Prestige Tuxedo other people with pets, large and small, began to arrive.

“Things are going smoothly. It takes a bit to settle the animals and people in for the photograph but it’s going very well,” Brooks told The Focus later in the day. The event lasted until 7 p.m. and Brooks said 40 pet families had attended.