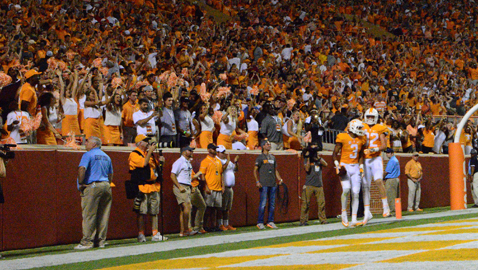 It’s just after 11 a.m. on a Thursday on the Cumberland Avenue Strip and commuters are working their way through a nerve-racking construction zone.

But this isn’t just another workday in the area surrounding the University of Tennessee campus; this is evident from the unusually full fast food restaurants and the high number of orange and white clad pedestrians.

This is game day and in just over eight hours, Knoxville’s beloved Volunteers will make their 2016 debut against the Appalachian State Mountaineers in front of a national television audience.

The tailgaters are throwing their parties and chatter has already begun about the game. The game is Tennessee’s first Thursday home game since Nov. 24, 1938 when the Big Orange routed archrival Kentucky 46-0 on its way to a National Championship.

Fast forward the clock 78 years and the Vols again have National Championship aspirations and the fans are ready as they’ve come from all over Tennessee to cheer on their beloved gridiron heroes.

And it will take more than construction to dampen spirits of fans as they eat and drink.

“Nothing will dampen the spirits of UT football fans. The atmosphere will be great at the game. The tailgate parties are a little different. Some people won’t be here because they have to work half a day.”

“I think the Thursday game is great,” Cox said. “Classes are out today, so a lot of the people you see here right now are students. The Thursday game day increases the economy in the area.

“This is a great start to a big weekend in college football.”

Expectations are always high on Rocky Top but this year, many have picked the Vols to win their division in the Southeastern Conference and Cox noted that the Top-10 preseason ranking has changed things a bit on the tailgate circuit.

“It’s always fun to come here but it’s a little different this year because of the high expectations,” Cox said. “Hopefully, [the team] can live up to those.”

The construction certainly didn’t stop fans from coming in from out of town.

Brent and Brad Houstand are twin brothers from Chattanooga and they arrived in Knoxville by lunchtime and they were ready for the game.

“We’re from Chattanooga and I went to school here,” Brent said. “We have season tickets and we come to see the Vols. I enjoyed my education here and I look forward to coming to the games.

“The Saturday games are always a lot of fun and I’m sure the Thursday game will be great too.”

“We’re from Chattanooga and we’ve been coming here since we were young,” Brad said. “We came here before we were in high school.

“I’m really interested to see how this offensive line plays.”

Tennessee played opening night on a big stage and that meant that the SEC Network was in Knoxville. Analysts Tim Tebow and Marcus Spears were in town. Both played for visiting teams at Neyland Stadium.

Tebow never lost in Knoxville but has memories of playing in front of a very large, very loyal and very loud crowd while a member of the hated Florida Gators.

“Tennessee has a loyal fan base and it’s a great atmosphere here,” Tebow said. “It does get loud in there.”

Spears, who played his first SEC game in Knoxville, said he will always remember Neyland Stadium.

“The first conference game I played was here,” he said. “This place embodies what SEC Football is all about.”

Tebow did happen to be a tad wrong Thursday.

Neyland Stadium wasn’t very loud because the Mountaineers took the near-capacity crowd out of the game early and nearly ruined the Big Orange’s season. The visitors led by as many as 10 points and only relinquished their advantage in overtime. Tennessee would win 20-13 but nothing came easy. High expectations have now given way to concern as the Vols prepare to play Virginia Tech at Bristol Motor Speedway Saturday night.