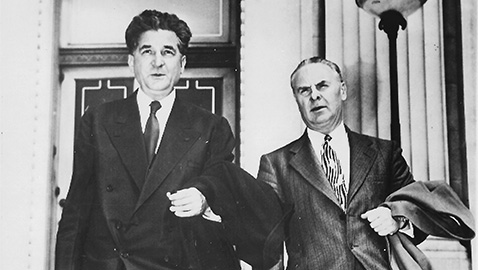 When the Founding Fathers came up with the House of Representatives as a legislative instrument meant to reflect the will of the people, they succeeded perhaps better than they could possibly have known.  The body has endured remarkably well since the birth of our nation and it has always interested me to learn about the people who have comprised the Congress at one time or another.  Our own congressman, Tim Burchett, is someone I have known for the majority of his life and his parents were good friends of mine.  Congressman Burchett is quite accessible to constituents of all walks of life.  I have told Tim he reminds me somewhat of the late J. Will Taylor who represented the Second Congressional District of Tennessee from 1919 until his death in 1939.

Congressmen have come to Washington, D. C. from every imaginable corner of the country and from just about every occupation one could imagine.  Still, after a while, all of us are forgotten, even by our families, as the years pass.  Indeed, to be able to publish a photograph of Congressman James G. Polk for this column proved to be quite nearly impossible.  The Library of Congress had no photo of Congressman Polk, nor did I find any at an Ohio institution.  I got lucky in finding the picture published with this column and added it to my own collection.  Everything seems to dim with the passage of time and reminders of the past bring history alive to those discerning people who still like to read.  Many of those same forgotten figures oftentimes have a compelling or interesting story to tell.

James Gould Polk had a name that might have helped him politically in Tennessee, but Polk’s political success came in largely Republican Ohio.  Like Tennessee’s James K. Polk, the Polk of Ohio was also a Democrat.  While there were many in Congress during James G. Polk’s time in the House of Representatives who engaged in farming, only James Gould Polk farmed for a living.  The others might practice law and have cattle, hogs, chickens and plant tobacco, wheat, or other crops, they were usually more “gentleman farmers” and one was not likely to see them behind a horse and a plow.  James G. Polk spent twenty years in Congress, yet unlike many of his colleagues, it was not his career.  Polk actually retired from Congress after having served for a decade and spent eight years out of the House before running once again for his old seat.

James G. Polk lived in the rural community of Highland in Ohio.  According to census figures, in 2010 there were 254 people living in Highland.  Polk’s parents and three of his grandparents were born in Highland County, Ohio.  James Polk’s father, William, was “for many years one of the most extensive cattle feeders in Highland County and president of the New Vienna Bank.”  The younger Polk graduated from college and spent a few years as principal and later superintendent of New Vienna schools.  After 1928, Jim Polk’s sole occupation was farming.

James Polk appeared to be an unlikely candidate for Congress when he first ran in 1930.  The incumbent was Charles Cyrus Kearns, a Republican who had been in office since 1915.  Congressman Kearns won renomination in the GOP primary over two opponents by a better than two-to-one margin.  Polk, only thirty-four years old at the time, defeated his opponent in the Democratic primary, a former mayor of Portsmouth, Ohio.  Like the rest of the country, Ohio’s Sixth Congressional district was feeling the effects of the Great Depression.  The Cincinnati Enquirer reported sensing a “Democratic trend” in September of 1930.  The once powerful Anti-Saloon League supported Congressman Kearns because it could not “get a line on” Jim Polk.  The Marion Star, a newspaper once owned by Warren G. Harding, wrote shortly before the 1930 election Republicans were confident of beating James G. Polk even in his home county.  The Republicans controlled every office in the Highland County courthouse but two.  The Cincinnati Enquirer acknowledged Polk had “made a personal canvass and has been vigorous” but thought it would take “a severe quake” to dislodge Congressman Kearns.  That quake occurred on Election Day with Polk beating Congressman C. C. Kearns by almost 4,000 votes and winning quite nearly 53% of the ballots cast.

Congressman James G. Polk was assigned to the House Agriculture Committee and did yeoman service for his rural district, which still had strong Republican leanings.  Jim Polk carefully tended to his home folks and as our own congressman Tim Burchett once said, the most important thing he and his staff could do was answer the telephone.  Jim Polk answered his mail and telephone calls.  One letter dated August 24, 1951 to Mrs. Martha V. Bogert will give the reader an idea of Congressman Polk’s diligence in serving his constituents:

I have not forgotten your card which was addressed to me at Highland and which was forwarded to Washington, D. C., announcing the Afton Methodist Church Bazaar.

Because of the rush of work here in the office I did not find time to mail you a package for your parcel post sale, however, enclosed is my personal check for $2.00 which you may add to your funds.

I hope the bazaar was a complete success.”

That same attention to detail in taking care of the home folks made James G. Polk unbeatable.  Congressman Polk defeated his GOP challenger with 56% of the vote in 1932.  In the more Republican year of 1938, Polk was hard pressed by GOP candidate Emory F. Smith and won by 799 votes.  Jim Polk was probably the only Democrat in the district who could have won that year.  Polk opted to retire in 1940 when he had every reason to believe his district would continue to send him to Washington every two years.  Jim Polk surprised just about everyone when he announced he was quitting Congress to return to his farm.  “That,” the congressman wryly said, “is my field.”  Polk said he thought it was time for the district to have new representation and he believed he should go home like any ordinary citizen.  Polk stressed he needed to get his farm into shape again and said he might consider going back to teaching once he was satisfied with his farming operation.  Polk, only forty-four years old when he announced his retirement from Congress, said he thought his three children would be happier back home in Ohio.  “Mrs. Polk might miss Washington activities,” Polk admitted, “women always do once they have experienced them.  But she is satisfied wherever home is.”

Judge Jacob Davis, a Democrat, was elected to succeed Congressman Polk in 1940 with President Franklin D. Roosevelt at the top of the ticket.  Congressman Davis was promptly defeated by Edward O. McCowen.

Initially, James G. Polk didn’t go home to Highland.  The former congressman was offered a job in the Department of Agriculture, which he accepted.  An announcement in the Hillsboro Press Gazette informed readers the former congressman “who has been residing in Washington, D. C.” was bringing his family home to Highland around October 15, 1947.  As it turned out, James G. Polk returned to Ohio just in time to run for Congress once again in 1948.  Like Harry Truman, Jim Polk was not at all impressed with what the President derisively referred to as “the do-nothing Congress” and its Republican majority.  Incumbent Edward O. McCowen had defeated Democrat Jacob Davis in 1942 and been reelected in 1944 and 1946.  Congressman McCowen had won reelection in 1946 with almost 55% of the vote.  Virtually nobody expected Harry Truman to win the 1948 election and most political prognosticators were convinced it would be a solidly Republican year.  Most observers believed the GOP would increase its majority in both houses of Congress.  It is quite likely local Democrats began urging Jim Polk to run for his old seat in the House of Representatives even before he returned to Ohio.

Polk filed to run for the Democratic nomination for Congress on February 3, 1948.  One of the words that any researcher would discover about James G. Polk was “kindly.”  Mack Sauer, who had run for Congress against Polk and lost, wrote in an editorial published in the Leesburg Citizen that while the former congressman had remained in Washington, he was not out of touch with the people of the district.  Sauer wrote that Polk, as a former educator and farmer, got strong support from both teachers and farmers.  The Press Gazette did not wait, but immediately endorsed Polk’s election to Congress as soon as he declared his candidacy.

As popular as James G. Polk had been inside the Sixth Congressional District, he had serious opposition inside the Democratic primary.  Franklin Smith of Portsmouth had been the Democratic nominee for Congress in 1946, losing to incumbent Edward O. McCowen.  Smith carried two of the six counties comprising the district.

The Republican incumbent, Congressman McCowen, was past seventy and not as vigorous as the fifty-two year-old Polk, who conducted yet another of his whirlwind campaigns.  McCowen, like many Republicans in 1948, may have relaxed because he thought his district was ordinarily Republican and believed it would be a great year for GOP candidates.  Organized labor was incensed because the Republican dominated Congress had passed the Taft – Hartley Act and Congressman Edward O. McCowen had strongly supported it.  The Cincinnati Enquirer reported the CIO was after McCowen’s scalp, but the effort of organized labor was largely confined to Scioto County, as the laborites did not wish to hurt former congressman Polk’s candidacy in the rural counties where he ran strongly.

The Cincinnati Enquirer, while acknowledging Congressman McCowen’s majority would be “pared down” from 1946, still thought the incumbent had the advantage going into the general election.  As it happened, 1948 was not at all a Republican year.  The presumed winner of the presidential race, New York governor Thomas E. Dewey, lost Ohio to Harry Truman.  Former congressman James G. Polk beat GOP incumbent Edward O. McCowen with 53% of the vote.  After an absence of eight years, James G. Polk had reclaimed a seat in the House of Representatives.

Edward O. McCowen was once again the Republican nominee for Congress against James G. Polk in 1950.  Seventy-three years old, McCowen made a real race of it, but lost by 1,339 votes.  Polk was reelected in 1952 when hugely popular General Dwight D. Eisenhower was at the head of the GOP ticket, along with Senator John W. Bricker.  Polk won by only 324 votes.  It would be the closest election of his long career.  Congressman Polk won by bigger margins in 1954 and 1956, but his health began to suffer.  In 1957, Jim Polk was being treated for cancer.

Still, Polk won reelection in 1958 with the biggest majority of his tenure in office, garnering 62% of the vote against the Republican nominee.  Polk’s congressional staff sent out a press release saying the congressman expected to spend “several weeks” at Walter Reed Hospital for “a glandular ailment.”  Two days later, James Gould Polk died.

Cathy Long, the widow of Congressman Gillis Long of Louisiana and a congresswoman, worked as a staff member for James G. Polk.  She recalled how very ill Polk was before he died.  As is traditional when an incumbent congressman dies in office, Polk’s colleagues paid tribute to him on the floor of the House.  Unknown outside his district and the halls of Congress, ordinary citizens lent their own voices to tributes acknowledging Jim Polk’s service to his country.  A friendly, kindly, thoughtful hardworking man, James Gould Polk was one of those congressmen who truly represented those people who sent him to Congress.  Jim Polk really was the farmer’s friend.