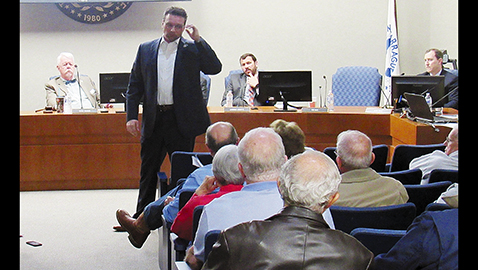 The latest in the saga

The drama swirling around Farragut’s decision to allow the infrastructure necessary for 5G cellular service was once again on display, this time Thursday night, Mar. 12 at the Town Hall. Republican State Rep. Jason Zachary, who represents Farragut in the 14th district, reported the latest update to the crowd.

Zachary started by briefly summarizing events from the last two months, when the issue first arose. AT&T and Verizon planned to install hundreds, maybe thousands, of towers around the Farragut community to enable 5G cellular service. The image of those towers defiling the landscape brought about an uproar of opposition.

Zachary then reminded the crowd that the wireless companies, because of both a 2018 state law and an FCC ruling, could not be prohibited from building wireless capabilities.

“We had no idea what 5G would look like, and the fact that they would have to put these blasted 25-foot cell towers in our neighborhoods to cover nine, ten, fifteen homes,” said Zachary. “So we passed the legislation and in August of that year the FCC issues a rule which says you cannot prohibit the wireless companies at all. It really put us in a tough position in terms of communities for how we were able to respond to this. So all we can do is try to put ‘em in a box and just try to pump the brakes as much as we can.”

“Pumping the brakes” meant imposing various limits on the tech giants, limits on things like height of the poles, distance between them, and how many could be installed. To achieve this, Zachary, Farragut town Administrator David Smoak and others drafted HB 2150, to try to alter the original legislation that was favorable to the cellular industry.

One of the issues was co-location with the Lenoir City Utilities Board, in which the cell companies would install technology on existing poles owned by LCUB. According to Zachary, he was able to bring the two together and work out what had been a breakdown in the contract. A signed contract should occur soon, he said.

“Verizon will be able to co-locate on all LCUB poles, versus dropping anything new in,” he said.

According to Zachary, when the cell companies learned of his new legislation, they opposed it. To get it passed, Zachary appealed to his colleagues. He was confident he had one vote more than the minimum he needed, when that extra vote called to tell him he couldn’t leave his community because of the Coronavirus.

“That made it a tie vote, which is like a failing vote and the bill won’t pass,” said Zachary. He needed more time.

Zachary called House Speaker Cameron Sexton and begged him to allow another week before the vote. “I called Speaker Sexton, I told him ‘I got a problem and I gotta have your help,’” Zachary said. “It was the last day the committee was supposed to meet. So it was either pass it, or we were done. I can’t run the bill because I don’t have the votes to pass it.” Sexton agreed and told Zachary to negotiate with Verizon and AT&T.

Zachary and Smoak presented the bill to AT&T and were able to come to an agreement. But it required that they backtrack on the aesthetics plan, which, according to AT&T, needed to be codified standardized. “The president of AT&T is literally walking (Smoak) through that so that can be put in place,” Zachary said. He called the city and county to update them.

Mixed in with all this, Zachary said, is a Tennessee Advisory Commission on Intergovernmental Relations report, which is an intergovernmental oversight agency. “They gonna issue a report about everything that’s wrong with the legislation that we passed. The carriers are gonna get that and be required to make adjustments based on that,” he said.

“We went all through it, and they were very agreeable, because they didn’t want me to run the legislation (HB 2150). So the agreement was we’ll do all these things. In the TACIR report there’ll be things about frequency…and I know we’ve got health concerns. Most of the emails I’ve gotten have not been on the health concerns, because they know that’s not something we can not win on right now. This is really about Phase 1, which is the pieces we know we can go after. The TACIR report will include some of that at the end of the year.”

So Zachary got his deal that, on aesthetics, that he thinks will be satisfactory to both sides. “They’ll (the techs) have some leeway, on things like placement – can we put a pole here, can you move it across the street,” he said, and reminded the crowd that the public was helpless to keep the cell companies from placing infrastructure. “But I will tell you,” he went on, “they’re on notice, and they’re going to be very, very careful. I’ve talked to Verizon. They have put a pause on this because they know how upset the community is. Unlike LCUB, we don’t have to do business with Verizon. Doing business with Verizon is a choice. They’re committed to working with us.”

Zachary might have underestimated the community’s concerns about the potential health problems from cell tower technology. When Alderman Scott Meyer brought up the issue, Zachary told him that at this stage, the proper focus was aesthetics, and that “if you bring up health concerns, you’re looked at as the tin-foil hat guy. Right now we simply can’t win on that ground.”

“There is a health issue with these poles, with radiation,” Meyer said.

Zachary didn’t deny the issue but reiterated, “We have to fight the battle we know we can win right now. I would argue that there is medical evidence that would show that there is a (health threat) from the radiation coming from the poles. I don’t want us to throw in the towel on investigating the radiation issues. I don’t think I wear a tin hat.”

The exchange was noticeably heated. Others in the crowd voiced health concerns as well.