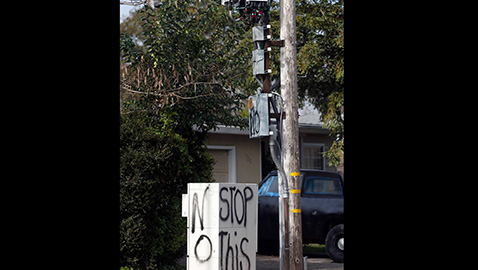 Most people in Knox County have no idea of a Tennessee law (HB 2279) that was passed in 2018 that allows cell phone companies to install a 40-foot tall cell tower with multiple cell antennas in the front yard of every person in the state of Tennessee. This law was written by attorney and AT&T Tennessee President Joelle Phillips and lobbyist Mandy Young of Verizon.

This state law is even more harmful to the property rights of Tennessee residents than the Federal Telecommunications Act of 2018. What the law does is allow a cell tower in the right of way in the front yard of all residents. Unlike the macro (large) cell towers on hillsides, no royalty is paid to the landowner. This state law has no visual guidelines so the result can be very ugly. For people with underground utilities, a wooden pole with as many as five cell antennas with exposed cables can litter their property harming their property value.

Real estate studies show a cell tower like this can lower property value by as much as 20%. From people with small front yards, this means the cell tower can be as little as 15 to 25 feet from where people sleep. The health risks at such a short distance can be very harmful according to some medical research. The cellular industry aggressively denies this.

In the past two weeks, there have been two public workshops in Knox County on cell towers in resident’s front yards. The first was in the Town of Farragut on July 16. The workshop lasted an hour and a half and the speaker was professional engineer Prof. Christopher Davis from the University of Maryland’s Electrical and Computer Engineering Department. Prof. Davis was paid to speak by the Cellular Telecommunications and Internet Association, which is a trade association representing the wireless communications industry in the United States. Verizon contacted the Town of Farragut and asked them to sponsor the workshop.

Many residents of Farragut were outraged at this workshop because they have asked for six months for a workshop to present information on property values and risks to public health. Residents have asked the Town of Farragut for the Environmental Health Trust, a leading authority on health risks of cell towers to hold a workshop. Some residents demanded equal time in the July 16 workshop. Other residents have demanded equal time in the next planning commission meeting on August 20. As of press time, there has been no comment on equal time from Farragut Mayor Ron Williams or Vice Mayor Louise Povlin according to Theodora Scarato, the executive director of the Environmental Health Trust. Scarato had emailed the Town of Farragut requesting equal time before the July 16 workshop. She requested time for the August 20 meeting.

In the July 16 workshop, Prof. Davis said the World Health Organization studies “concluded no adverse health effects have been established as being caused by mobile phone use. At certain levels, there is a small possibility that higher use can lead to cancer.”

Prof. Davis even claimed, “The field levels are very low, it is about the same exposure as the light level from the planet Venus.”

Farragut residents took out their frustration in the next week’s meeting of the Farragut Board of Mayor and Aldermen on July 23. In Citizen’s Forum residents again demand equal time for the Environmental Health Trust. Residents Bill Hardin, Robert Gleason and Mike Mitchell all wrote to Citizen’s Forum requesting equal time for the Environmental Health Trust to have a workshop. In Mike Mitchell’s email he enclosed an email from the executive director of the Environmental Health Trust, Theodora Scarato, requesting equal time in the August 20 planning commission meeting. Scarato also included in her email to the mayor, vice mayor, and community development director a list of six factual errors and misrepresentations from Prof. Christopher Davis in the prior July 16 workshop. Not only was there proof of the errors there were internet links to the studies in question.

Mitchell’s email also included another error from Prof. Davis where Mitchell wrote, “Prof. Christopher Davis’s testimony contained many serious errors as you can read in the email below to the Planning Commission from Theodora Scarato. Prof. Davis is not a doctor, toxicologist, or epidemiologist, he is an engineer. He has no training on how cellular radiation affects the human body. I want to discuss with this board Prof. Davis’s ridiculous comment, ‘Regarding base stations, or cell poles, ‘‘The field levels are very low, it is about the same exposure as the light level from the planet Venus.’’ Our friend Jerry Guthrie in Village Green is fighting a 38-foot 4G cell tower in his front yard that will be 30 feet from where he sleeps. The cellular radiation will reach his head almost instantaneously. 4G cell towers are much more dangerous than 5G cell towers because they broadcast at a much lower frequency meaning they have much more penetrating power. Compare this to light from the planet Venus which is approximately 25 million miles from Earth. It is so far away it takes light traveling at 186,000 miles per second six minutes to reach Earth.”