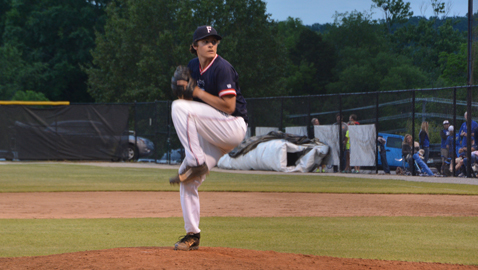 For much of the 2016 postseason the Farragut High School baseball team has endured its share of offensive struggles.

But the Admirals (37-6) saw their bats awaken a bit in a comeback win against Powell in the Region 2-AAA Championship Game. There, Farragut scored five runs in the bottom of the seventh inning and won.

On Friday, the Admirals picked up where they left off and used a big first inning to knock off Morristown East 13-0 in a Section 1-AAA tilt at John Heatherly Field. The win enabled Farragut to punch its ticket to the Class AAA Tournament, which starts on Tuesday. The Admirals will make a ninth consecutive trip to high school’s grand stage.

Farragut took advantage of two first-inning errors by the Hurricanes and sent 10 hitters to the plate in the bottom of the opening frame and when the dust had settled, the Admirals opened a 6-0 win on just three hits.

Junior right fielder Chandler Chambers delivered a clutch three-run double to really blow things open. Alec Rinehart also had an RBI single and Justen Freeman drove in a run when he reached on an error. Farragut got its other run when Cole Morgan (who led off and reached on an error) came home on a wild pitch.

Freeman doubled and scored on a single by Carmelo Venero in the second. Farragut added three runs in both the third and fourth.

In the third, Chambers knocked in a run with his second double of the game. Morgan singled home a run and the Admirals scored on Rinehart’s sacrifice fly. John Painter delivered a two-run single in the fourth.

“This is the best game that we’ve played in two weeks,” Farragut coach Matt Buckner said. “We haven’t been playing particularly well lately but I’m proud of our kids because we work 12 months a year for these two weeks.”