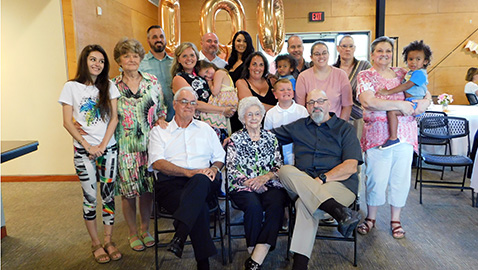 It’s often said it’s not how long you live, but how you live. Ruth Jenkins has checked off both boxes.

The Farragut centenarian turned 100 on Aug. 11 and is still full of life.

Friends and residents where she lives at Park Place West, a retirement community off Kingston Pike, along with a few family members, joined in marking the milestone a couple days early on Aug. 9. Then more family members and friends came to celebrate the special occasion on Aug. 11 at the Shed building behind Two Rivers Church near Dixie Lee Junction.

Look at it this way. Five-year-old Everly Sue Jenkins-Rice, Ruth’s youngest great-granddaughter, can show you how old she is with one hand. Using this method, Ruth would have to hold up both of her hands and open and close them 10 times.

“I think it’s rare, because barely anyone lives to be 100,” said Isaac Jenkins-Rice, her 9-year-old great-grandson, and then added, “She’s nice and kind.”

“My golly, well the fact that she is 100 years old is absolutely insane,” said Brooks, who made the trip from her home in South Florida for the occasion. “I would have never thought that I would have someone from my family that age. And her genes, she’s just so lively. She’s up and at ’em. She’s still walking, she’s still doing really well. She’s healthy. She still cracks jokes and makes you laugh. You wouldn’t even know she’s 100. It’s like she’s 85. I’m very grateful to have family like that.”

Jenkins is the oldest living member of First Baptist Church Concord, said Nancy Clarke, who has known Ruth for three years and visits her regularly as a volunteer in the church’s Homebound Ministry.

“She’s usually cheerful and smiling,” said Clarke, who attended both days of the celebration. “And I’ve only visited her once when she was still in her housecoat. She’s always dressed and her hair fixed. You would never think she was 100 years old. And her mind is very good.”

Ruth received a lot of birthday cards and said she didn’t want any gifts. She was content being surrounded by loved ones and longtime friends, but did admit two days of celebration did tire her some.

Jenkins’ voice reaches a high shrill sometimes when she gets tickled or excited and that happened often in the interview with this reporter.

They always ask – What’s the secret to a long life – so that question was posed to the honoree on Friday.

“The only one I know, the Lord has kept me alive for some reason,” answered Ruth. “I don’t know what that reason is yet, but I pray about it all the time.

“Watch that last one,” one of her sons kidded.

This reporter believes the answer to the next question is 100 percent true … What’s something you saw that most of us younger folks never did?

“I guess the horse and buggy,” said Jenkins. “And another thing – Kingston Pike was crushed gravel two ways, and then later they blacktopped it. There were just two lanes. There wasn’t anything on Kingston Pike, not a building anywhere. Nothing. (But) horses and cows everywhere.”

Ruth was then asked if she has a bucket list. What do you want to do next?

“I’d like to jump out of a plane,” Ruth blurted out, tipping over everyone’s giggle box.

Any other plans for the future?

“I just want this (interview) to be over with,” she laughs. “Just git.”

Ruth continues laughing at what she had said, but when she sees that the reporter has been taken aback a little, she quickly adds, “I’m just kiddin’.”

Brianna was right. Her great-grandmother is a jokester.

Jenkins was raised in the Blue Grass area of West Knox County on a small farm near Lowe’s Ferry Pike, which is now known as Northshore Drive. She was the daughter of Julia Ann Suits Coker and John Coker and the oldest of five children.

Her mother was hospitalized with tuberculosis when Ruth was 12 years old and died two years later at age 44. Ruth helped her father, who worked in a quarry for Appalachia Marble Company, with the younger siblings, including three sisters and a 3-year-old brother at the time of their mother’s death.

“My father didn’t know what to do when my mother passed away … It was hard on him,” said Ruth. “He would get people to help us off and on.”

But much of that load fell on Ruth, who managed to get two summers of high school teaching after attending Blue Grass Elementary School.

“My teacher lived right below me, so I would walk to her house,” Jenkins recalled. “She would teach me my high school through the summer. That was very hard, but I did two years of it, and that was all.

“I was the oldest sibling and I had it all to do.”

Ruth married Fred Jenkins and they had two sons, Richard and Steve. They also had three grandsons and two granddaughters.

She worked in sales for Miller’s Department Store on Henley Street, mostly in clothing, and continued when Miller’s moved to West Town Mall.

Ruth’s favorite part of the Bible is The Lord’s Prayer and she loves flowers. “I still have flowers on my patio,” she said.

For fun, Ruth said, “We have everything going here (at Park Place West). We play bingo. We play horse races (with dice) twice a month.

“We take exercises. We have a movie every night. Just all kinds of stuff. There’s so much going on, I can’t keep up with it.”

What’s the best thing about turning 100?

“I thank my good Lord for it,” she answered. “The Lord has really blessed me. And I’ve worked hard … If working hard kills you; I’d been dead a long time ago.

“I hope my longevity goes to both of my boys. But I don’t know where I get that. No one in my family has lived this long.”

“Very happy,” said Ruth. “Well, I have my ups and downs. I’ve lost two granddaughters, and when you have a family, there’s all the time something happening. It’s not 100 percent perfect. No family is. And if you say they are, that’s not so.

“Everybody has their ups and downs. You have to cope with them. You have to pray about them, because you can’t do it all by yourself. You have to ask the Lord to help you through everything.”

Mary Moeller of Farragut was Ruth’s Sunday School teacher in the older women’s class at First Baptist Concord and said “Ruth always had her opinion. She was a wonderful friend of everybody, just a real blessing to all of us.”

Katy and Roy Ogle, who also attended the Sunday afternoon party, was a younger couple that were longtime neighbors of Ruth and her husband when they lived on Thornton Drive off Concord Road.

“We moved in 2000 to a condo in Farragut Commons and later Ruth bought one across the street after her husband passed away,” said Katy.

“She was always a very good neighbor and a good Christian woman from knowing her at church. She was a little older than me so we weren’t in the same Sunday School class long.

“She told me one day, ‘I’m in the jumping off class,’” laughed Katy.

But her longtime “buddy” said she’s not surprised Ruth has lived to be 100.

“Not really. She was a go-getter … a very independent, self-sufficient lady.”

And she still hasn’t jumped off.