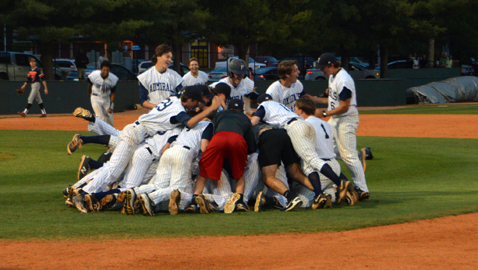 But the bottom of the seventh was a different story as the Admirals overcame a 5-1 deficit to nab a comeback victory and claim the region title.

“It was just one of those things. It was one of those times where nothing went right all day,” Buckner said after his squad made a miracle comeback and snagged a 6-5 victory over the Panthers at John Heatherly Field at the Ballpark in Farragut. “We were dead in the water and then all of a sudden, we played like Farragut.

“We played like crap for two hours and then we were Farragut.”

Farragut (35-6) and the Powell (22-15) both advanced to Friday’s State Sectional round. The Admirals hosted Region 1-AAA runner-up Morristown East while the Panthers traveled to Sevier County to face the Smoky Bears. Results were not available at press time, but those four squads battled for two spots in the upcoming Class AAA State Tournament in Murfreesboro.

Farragut, which advanced to Wednesday’s championship showdown by knocking off District 3-AAA Champion Karns 3-0 at Coach Dwight Smith Field on Monday, May 16, claimed the runner-up spot in District 4-AAA despite battling some struggles at the plate.

The Admirals, who scored three unearned runs in the top of the first inning against the Beavers but were stymied for the rest of the game, saw their bats silenced early against the Panthers.

Cole Morgan drew a leadoff walk in the bottom of the first. Carmelo Venero reached on an error in the second and Alec Rinehart walked in the third. The Admirals didn’t pick up a hit until Morgan singled in the fifth. The Admirals also scored their first run of the game in that frame.

Venero and freshman first baseman Parker Noland had hits to lead off the sixth but the Admirals were turned away when John Painter grounded into a double play and Rinehart flew out to end the inning.

The Panthers squandered a chance to add to their advantage in the top of the inning as Levi Everett and Logan Ward both singled before freshman Brad Day retired the side.

Then things got crazy in the bottom of the inning against Powell reliever Hunter Long, who entered to pitch.

Morgan led off the frame with a single before Duncan Pence reached on an error. Jake Hagenow walked to load the bases before the Admirals pulled to within 5-2 when Justen Freeman drew a free pass with the bases loaded. Morgan scored.

Venero then walked with the bases loaded to score Pence to make it 5-3. Noland’s RBI single made it 5-4 before Painter won the game with a two-run single.

“We’re never out of a game,” Painter said. “We’ve got the lineup to score runs.”

Noland said he had no doubt that the Admirals would prevail after they scored in their final at-bat.

“We all knew that John could get it done,” Noland said. “He’s gotten it done for us all year.”

“This one was painful,” he said. “The good thing is that we live to fight another day.

“These are teenage kids, so they’ll bounce back. You have something like this happen and sometimes, you look back on it and you realize that it happens for a reason.”

Warriors junior first baseman Alex Osborne had three hits and drove in a pair of runs to lead CAK (29-9) and Turner Helton made a spectacular diving catch to help the Warriors hold on against the Irish (16-19).

In Region 2-A: Grace Christian Academy nabbed a regional championship when it downed Meigs County 5-3 Wednesday night. The Rams (26-13) jumped to a 3-0 lead. They played Unaka Friday with a seventh consecutive trip to Murfreesboro on the line. Results were unavailable at press time.

Hunter Ross had an RBI single and recorded the final out on the mound to record a save for the Rams.