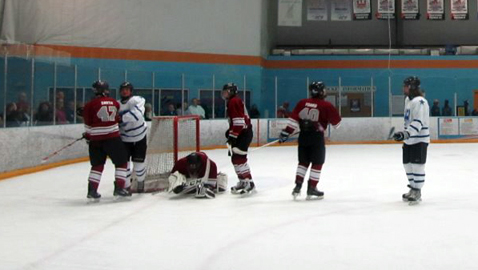 And the Admirals continued their recent league dominance by routing rival Bearden 8-1 at the Icearium in the 2016-17 season opener for both clubs.

Farragut, which held a slim 2-0 lead after two periods, blew things open with six goals over the final 13 minutes. That barrage enabled the Admirals blow open a close game between two teams that reached the state tournament last season.

Farragut (1-0) outshot its rival 25-3 but after the game one play stuck in coach Jeff Lindsay’s mind.

“I didn’t like giving up that goal and losing the shutout in the end,” Lindsay said after seeing his savvy squad surrender a marker inside the final minute of play. “On that play, we had some veteran players who were not doing what they were supposed to be doing.

“I wasn’t happy giving up that goal in the end.”

The Ice Dawgs (0-1) got their lone goal from Jace Jenkins in the waning seconds while the game was being played with a running clock.

The game, however, wasn’t without its bright spots for Bearden early. In the first period, the Ice Dogs killed off a 5-on-3 penalty situation and kept the game scoreless.

“We went down two men early and we didn’t give up a power play goal,” said Bearden assistant coach Tom O’Brian, who was coaching the team in place of head coach Aaron Barnes, who was ill. “We’re a young team and we’ll learn from what we saw tonight.

“We’re playing a lot of freshmen and sophomores.”

One youngster in the lineup for the Ice Dawgs was goalkeeper Mathieu Senechal, who made nine saves in the first period and kept the game scoreless until late in the frame.

The Admirals finally got on the board when Corey Lindsay scored with 26.4 seconds left. Veteran Kenny Richter was credited with an assist on the game’s first tally.

Senechal was busy all night. His counterpart, Zachary Jordan was scarcely tested. He did see a shot in the first period and had one save in the second.

Coach Lindsay said the Bearden goal couldn’t be blamed on his young netminder.

“He made a good save on the first shot and then he was left by himself after the rebound,” the coach said. “We played pretty well and we got better as the game went on.

“We have a lot of experience on our team.”

Things got ugly for the Ice Dawgs in the third and final frame as Farragut scored six goals.

The Admirals will play the Knoxville Warriors Wednesday at 6:40 p.m. in the Icearium with the winner of that game taking sole possession of first place.

The Warriors outlasted the Knoxville Knights 9-6 in last week’s other game.