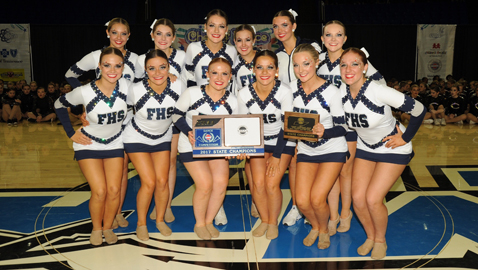 “We practice multiple hours every week to prepare for competition,” said Coach Adonia Adams. “Our goal this year was to give a better and stronger performance than we did last year and we accomplished our goal.”

Farragut also will be competing at the UDA Nationals in February. At the 2017 event in Orlando, Farragut placed in the Top 5 in the nation in both the Small Varsity Pom and Jazz divisions, said Adams.

Bearden stands out on and off the dance floor

Dancing may be what they do best, but Bearden High’s state championship dance team does so much more.

“As a teacher, I am also very proud of how this team serves its school and community,” said team sponsor Rebecca Nutter. “We try to have a focus on school spirit by supporting as many school athletics teams and clubs as possible.”

At the TSSAA competition in November at MTSU in Murfreesboro, Bearden’s dance team, coached by Hannah Keathley and assistant Kathryn Brasfield, captured the state championship in the Large Varsity Jazz division for the fifth consecutive year.

“We were thrilled to continue such an outstanding legacy,” said Nutter.

Bearden will be competing in Large Varsity Jazz and Pom at the Universal Dance Association’s National Championships Feb. 2-4 at Walt Disney World in Orlando.

In the 2017 nationals, the team finished a program-best third place in Large Varsity Pom, competing against “the absolute best dance teams in the country,” said Nutter.

In addition to performing on the sidelines of home football games and before basketball games, the Bearden dance team has cheered at a girls’ soccer game, attended volleyball games, sent “good luck” packages to the BHS band before competition, participated in the Student Government Association’s Fall Festival and opened car doors at elementary schools, said Nutter.

The team has also formed a partnership with Emerald Academy and held a free dance clinic for 71 students in November. It also volunteered at the Ronald McDonald House, sponsored a Thanksgiving basket for a BHS family in need and was all set to run in this year’s Jingle Bell Run to support the Arthritis Foundation before it was cancelled due to inclement weather.

At the free after-school dance clinic at Emerald Academy on Nov. 15, the girls taught basic dance skills, short dance routines and sideline cheers. The kids performed for their parents at the end.

Later that week, the BHS dance team was at the Ronald McDonald House, where the girls baked several batches of cookies, cleaned the entire facility top to bottom, wiped down playground equipment and made Thanksgiving cards for the residents.