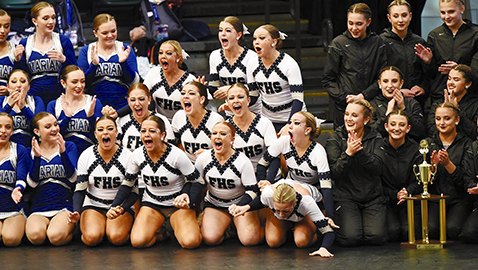 Competing in the Universal Dance Association’s National Championships Feb. 2-4 at Walt Disney World in Orlando, Farragut captured first place in the Small Varsity Jazz division, which included a field of 77 total teams – the biggest division at the UDA event.

“This year is the highest we’ve ever placed in team history,” said head coach Adonia Adams.

The UDA nationals are the largest and most prestigious competition for high school dance teams in the nation.

While hundreds of teams attend, the squads are divided out among 10 divisions, based on team size and style of dance. Teams are allowed to compete in a maximum of two divisions.

“Our Jazz routine was set to a version of ‘What the World Needs Now,’” said Adams. “It was a powerful performance that showed just how strong our team connection is. Most of these girls have been dancing together since middle school, so it was wonderful to see their years of hard work pay off.”

In November at the TSSAA competition at MTSU in Murfreesboro, Farragut took first place in the Small Varsity Pom division for the third year in a row and placed second in Small Varsity Jazz.

Earlier this school year, Bearden captured the state championship in the Large Varsity Jazz division for the fifth consecutive year.