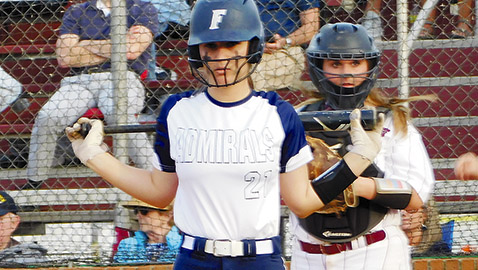 Farragut High’s 2022 softball team may not be as good as last year’s state championship team, but the current Lady Admirals are still good enough to repeat as state champs.

“Last year’s team was absolutely exceptional in every facet of the game,” said Green. “We could hit, we could field, we could run and we had outstanding pitching. We also had outstanding depth. If we were missing a kid, we could put someone in off the bench and not miss a beat.

Everyday competition among teammates really made Farragut good last season, according to Green. “This team is lacking some of that competitive depth.”

The Lady Admirals jumped out to an 11-0 lead over a good Alcoa team coached by former Tennessee Lady Vol standout Sarah Bailey, and her Lady Tornadoes responded with four runs in the bottom of the first and three in the second to reduce the deficit to 11-7.

“Sometimes we put up really big numbers and have a tendency to lose interest,” said Coach Green. “Today that came back to bite us a little bit.”

But Farragut ace Avery Flatford, a senior and Tennessee Tech signee, didn’t pitch against Alcoa. Instead, No. 2 pitcher Emma MacTavish, a sophomore, went the distance in the circle.

“We put it a little bit on cruise control and Alcoa or any team that Sarah Bailey is going to coach is going to come out and be competitive no matter what and they came out and hit it around pretty good,” said Green.

“But, like I told them, I’m never going to be disappointed with putting up 21 runs in a game. I am a little disappointed by giving up seven, but on the flip side I told (MacTavish) I was very proud of her for putting up zeroes for the last three innings.”

Crushing the ball up and down the lineup, the Lady Admirals added 10 more runs over the last three innings and the game was halted by the mercy rule.

Farragut has six returning starters from last season. Some have moved to new positions. Flatford, of course, is the bell cow.

Senior Vivian Boles is an everyday starter in right field this season and Livingston has moved from RF to CF to take Ace Strickland’s spot. Strickland, a Division 1 basketball prospect, decided to focus more on basketball and also is running some track this spring for conditioning, said Coach Green.

“Farragut is very likely the best softball team in the state,” said Alcoa’s Coach Bailey. “They took advantage of our numerous defensive miscues.”

“Once we get there, we’ll just have to see how we’re playing. Hopefully, we’re playing outstanding at that point in time and everybody is healthy and we give ourselves a shot to compete for another state title.”

NOW IN COLLEGE: Farragut graduated two starters last season. Third baseman Cameron Young, who Green says is one of Farragut’s best in school history, is at ETSU and leftfielder Jordan Kanipe is at Belhaven University, Miss.