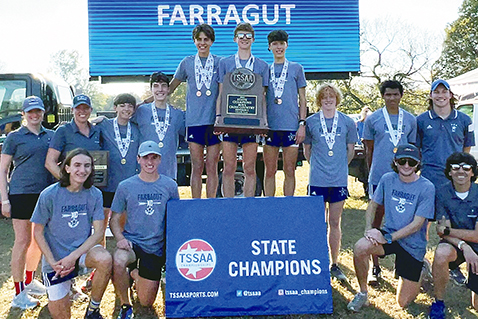 Farragut’s cross country team wasn’t in the best of health at the TSSAA State Championships Friday, but the Admirals took care of business.

“This was the first state title for Farragut boys cross country since 2001, so we are pretty excited,” said Coach Chelsea Osborne. “The boys were really focused going in and executed the plan perfectly.

“We went into the meet fighting sickness, which is always nerve racking, so to come in and have the day we had was awesome.”

Senior Trevor Coggin led the way by placing second with a time of 15:33.13 in the Class AAA race on the 5,000-meter course at Sanders Ferry Park in Hendersonville.

“Trevor finishing second after finishing seventh last year and running 15:33 in the heat shows his toughness,” added Osborne. “Braden Ebbert and Matteo Tonnos really stepped up and it’ll be exciting to see what they accomplish next year.

“Quinn DeGuira and Jarek Morton were pivotal in the team victory. They both had their best race of the season at State.”

Freshman Owen Clemons of Cleveland took top individual honors with a time of 15:22.47 and Bearden sophomore Cade Crum came in third (15:43.69) behind Coggin.

Farragut’s fifth runner in its team score of 41 points was junior Harrison Cunningham, who placed 20th in 16:33.04.

Morton, a senior, came in 24th with a time of 16:40.22. Senior Riley Hanson rounded out the Admirals’ seven-man team.

Farragut runners one through five finished within 59 seconds of each other and posted an average time of 16 minutes.

In the Class AAA girls’ event, Karns sophomore Hannah Kramer was the top Knox County runner as she placed fourth in 18:50.76.

Hardin Valley junior Maddie Archdale was 12th in 19:16.99 and Karns junior Rylee Gifford also earned All-State honors by finishing in the Top 15 with a 14th place time of 19:20.51.

“On the girls side, we knew a lot of people said we were just in a rebuilding year, so we wanted to come in and make a statement,” said Coach Osborne. “Kennedy has been a great senior leader for this team and she had a great day Friday. We are a young team so we are looking forward to the future.”

Nolensville sophomore Claire Stegall was the Class AAA individual winner with a time of 17:52.04. Brentwood took the team title with the lowest point total (41).

Drew Johnson of Donelson Christian took individual honors with a time of 16:19.47.